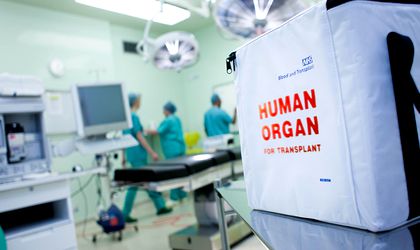 An advanced research & development center in experimental medicine was recently inaugurated in Iasi. Meanwhile, some state hospitals across Romania are making progress in expanding the range of more complex medical services that they offer patients. And the past month has seen a high number of transplants of various organs.

The advanced research & development (R&D) center in experimental medicine (CEMEX) aims to increase the quality of R&D activity in the medical field, improve health services and promote economic competition with an impact on the pharma industry.

The total value of the project, which is co-financed via the European Fund for Regional Development, is RON 31 million. Non-reimbursable financing covers RON 25 million of the costs, according to Agerpres newswire. The project was started in March, 2014.

“We often hear resigned voices saying: ‘Research is costly. Where do we get the money from, especially in Romania?’ Nothing could be more wrong. Research does require investments indeed, but true quality research, anchored in the needs of the market, can bring a ten-fold return on the investment. We have a real shot at prosperity which is solidly based on the high technology that CEMEX provides, together with the financing opportunities that it can access,” said Daniela Drugus, CEMEX project manager, quoted by Agerpres newswire.

July was Organ Donors’ Month and the recent period has been particularly rich in transplant medical premieres.

The Emergency Institute for Cardiovascular Conditions and Transplants in Targu-Mures has carried out eight heart transplants this year, which is a record not only for this medical center, but also in Romania. “This number has not been reached for very many years and we are only halfway through the year, which makes us very glad,” said Dr. Horatiu Suciu, head of the institute’s Cardiovascular Surgery Clinic, quoted by Agerpres newswire.

“So far, I believe that the activity in this field has had very good results, and we want this to continue. The problems are related to the medical staff, which is insufficient, and more people must be hired, which depends on the Ministry of Health. Requests in this sense were submitted a long time ago but it seems they are destined not to be answered. Also, certain drugs cannot be found in the country,” said Suciu.

The institute did not actually ask to hire more staff, but to redistribute workers and modify its structure. However, even though it is the only institute in the country that has carried out heart transplants this year, the Ministry of Health did not provide an answer, according to Agerpres.

Cardiovascular surgeons in Romania have pleaded for the proper and equal financing of surgeries both in the public and private health system. According to Romanian law, in the case of cardiovascular interventions that cannot be carried out in local public hospitals, the patient can be sent abroad via the E112 form. However, if the respective surgery can be carried out in a Romanian private hospital, the Romanian state does not cover the costs, according to Agerpres.

Cardiovascular surgery costs EUR 7,000 in a private clinic in Romania, while abroad the state would have to pay between EUR 37,000 and EUR 40,000.

At this point, Romania is more than EUR 300 million in debt to clinics abroad, as a result of cases solved with the help of the E112 form.

According to Dr. Catalin Carstoveanu, councilor of the heath minister, 40 percent of children with cardiac problems, out of 900 who need surgery, can be operated on in Romania and abroad.

The Center for Liver Transplant in Iasi was last month the scene of the first liver transplant, carried out by a team of ten doctors. This was the first intervention of its kind in Iasi, two months after the inauguration of the center, according to Agerpres.

“Iasi has potential. First of all, it benefits from advanced surgery, Secondly there are donors in Moldova,” said Prof. Dr. Irinel Popescu, of the Fundeni Hospital in Bucharest.

“The harvesting teams were made up of doctors and auxiliary medical staff from the Targu-Mures Emergency County Hospital, the Cluj-Napoca Urology and Renal Transplant Institute, the Fundeni Clinical Institute in Bucharest and Klinikum der Universität München. A team of doctors and nurses within the ICU of the Targu-Mures Emergency County Hospital was in charge of preparing and keeping the donor alive, an activity which is extremely important before any harvesting,” said hospital officials.

Another medical premiere took place in Baia-Mare, where the emergency hospital Dr. Constantin Opris harvested a lung for the first time, according to institution officials.

Medical teams from Bucharest and Cluj harvested the heart and the kidney of the donor, while a team made up of three doctors from the AKH Austria harvested the lung.

While heart, liver, kidneys and tissues from donors have been collected before in this hospital over the past three years, this was the first time when a lung was harvested from a brain-dead patient.

There are very few Romanian patients on the waiting list for lung transplants; therefore transplants are carried out abroad, according to the institution.

The Romanian National Transplant Agency has a collaboration contract with Eurotransplant, which stipulates that hospitals in Romania supply lungs for Eurotransplant, so that Romanian patients can undergo transplants in Vienna, according to Agerpres newswire.