Analysis. Change of art: Romanian names make their name on the contemporary scene 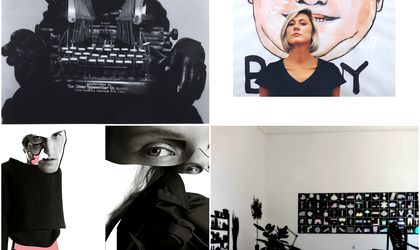 Believe it or not, Romania is currently the talk of the contemporary art world, with major figures emerging onto the global avant-garde stage. To find out more, BR talked to three contemporary art connoisseurs: Corina Bucea, project manager of the Romanian pavilion for Biennale di Venezia 2017; Eugen Radescu, director of the Bucharest Biennale; and Nona Serbanescu, executive director of the Association for the Promotion of the Contemporary Arts.

Crucially, the independent art sector still suffers from a lack of planning, money and institutional help of any kind. “In the stormy landscape of private, independent initiatives, I am relieved to see some of the spaces for contemporary art still there – see Fabrica de Pensule (Cluj-Napoca), Salonul de proiecte (Bucharest), and tranzit.ro to name but a few,” says Bucea. “And some new initiatives are appearing or growing stronger and bolder (such as aici acolo, a nomad pop-up art event happening in various abandoned spaces in Cluj, with a particular focus on young artists and technology). One of the most interesting things that I noticed in 2017 is that contemporary art is visible and dynamic outside the usual suspects of the ‘hotspot’ cities (we expect that from Bucharest, Cluj and Timisoara and Iasi). One of my new year’s resolutions is to see for myself more of all the good things that seem to be happening in Targu Mures, Sfantu Gheorghe, and Arad.”

She also cited international art events, such as the Venice Biennale, Documenta Athens/Kassel and Skulptur Projekte Munster. “Romanian artists have participated in each – Alexandra Pirici, one of the strongest voices in terms of practice and discourse on today’s international scene at Skulptur Projekte Münster, with the project Leaking Territories; and Geta Bratescu at Documenta Athens and Kassel. The highlight for me, since I became deeply immersed in it, was of course the Venice Biennale, where I worked as part of the team behind the highly praised Apparitions, a solo show by Geta Bratescu curated by Magda Radu. The Venice Biennale also featured Ciprian Muresan in the international exhibition, with a selection of drawings revisiting historical art works,” adds the project manager.

“Unfortunately, Romania is going through a complicated period, politically and socially, and the art scene is greatly affected by all these wrong changes that are happening now. Even so, the contemporary art scene is fighting to survive to all the vicious political maneuvers. And yet 2017 was a good and interesting year in contemporary arts, with for example  Lea Rasovsky at the Mobius Gallery  (still running), the Theodor Moise exhibition at Creart, and even the WOW – War of Worlds exhibition curated by myself at Mora Art Centre, Felix 72A Gallery, and Pasajul Universității,” notes Radescu.

Serbanescu shares with Business Review quite a list. “With an impressive new edition of the Art Encounters Biennale at Timisoara, a dense event by NAG (White Night of Galleries) in 12 cities, a courageous theme for Bucharest Art Week and a few very relevant visits from artists abroad to Bucharest such as Hirotochi Ito at Galateca,  2017 was a full year for the Romanian contemporary art scene. A very interesting project that started in 2017 and which caught my attention was The Institute of the Present, a research platform by Stefania Ferchedau and Alina Serban. If I were to sum up the year I’d say it brought improvements in mobility and good quality international exhibitions, a better focus and a more vibrant art scene in cities outside Bucharest.”

Bucea mentions some emerging talents. “It was definitely refreshing to see excellent works (and solo shows) by several young artists, such as Flaviu Rogojan (still on view at Pilot in Fabrica de Pensule), Bogdan Armanu and Silvia Amancei (showing in 2017 at Salonul de proiecte in Bucharest) and discover the work of Mirela Moscu, a Cluj-based painter who changed my feeling about painting (with a solo show at Lateral Art Space).”

For Radescu, two artists stood out. “I really love the work of Andreea Chirica; she is very involved and also very chameleonic in terms of working with different mediums and art levels. Also, Boris Peianov, a Romanian-Serbian architect, who has a very interesting technique of doing collages,” adds Radescu. Serbanescu also named her picks. “The one young artist whom I discovered in 2017 and who was also present at the Diploma show is Ciprian Grigorescu. (…) Also, Razvan Radu is an artist we will be hearing about in the next few years. Although we are not talking about a newcomer, I also want to bring to the public’s attention Angela Bontaș, an artist from whom we will see a major comeback in the next few months.”

Great news comes from New York City. “I’m definitely curious to see (though from a frustrating distance) what Alexandra Pirici will do in her show at the New Museum, one of the most interesting museums in the world, especially since her work seems to take a step further by involving a hologram into her team of performers,” says Bucea. Locally, she mentions the opening of a new private museum (MARe) in Bucharest, “especially since it feels like a well-kept secret, and I am curious how it will merge itself into the local art scene.”

For Bucharest, it’s Biennale time. “This year for sure Bucharest Biennale 8, curated by Beral Madra and Razvan Ion, will be the main contemporary art event. With more than 20 international artists and some Romanian names, BB8 will offer the fresh perspective of both emerging and established artists. As a biannual cultural event, BB’s temporary structure allows a deconstruction of the systems supporting and underlying what has been called the ‘experience economy’. The Biennale is an attempt to turn these scripted ‘experiences’ upside down, to re-think and re-imagine processes of domination, while positioning the city of Bucharest as a field of cultural action and exchange,” concludes Radescu.

Serbanescu also cites the Bucharest Biennale. “It is pretty early to talk about 2018 in Bucharest as we are still waiting for the schedules of the most important art events. But it is an even year, meaning there will be the Bucharest Biennale so we should keep our eyes on Razvan Ion and Beral Madra, the curators of the eighth edition,” says the executive director. She adds that the two main funders of the arts and cultural scene have not yet published their calls, so few art events have been announced so far. “One of the main problems in the Romanian independent arts scene is the lack of predictability, as all art organizations work out their annual budget during the current year,” she notes. According to Serbanescu, who also coordinates Bucharest Art Week, they will come up this year with an unconventional, experimental collective curatorial solution to add consistency in modus operandi to the theme of “Working Together”.