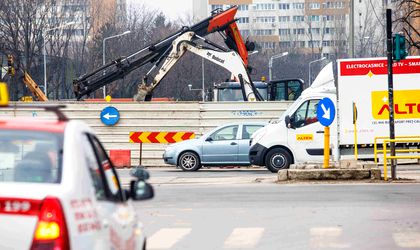 With Bucharest set to have a new subway line linking the west and center of the city from 2019, property developers are planning new investments in this area, which is home to more than 300,000 people.

Consultants say that we can expect new office and residential developments in western Bucharest, but we shouldn’t ignore the potential of northern Bucharest, where a separate subway line is due to be built. The authorities want to link the capital’s main train station with the Henri Coanda international airport as part of a EUR 1.4 billion investment that will run well into the next decade.

West side story: office and residential

Extending the subway infrastructure in Drumul Taberei will alleviate traffic in this area, which has the highest population density in the city, suggested representatives of JLL Romania.

“The area that will most benefit from the extension of the M5 subway line is the land parcel between the Razoare intersection and Calea 13 Septembrie, between Panduri, Progresului and Sebastian roads. Some 15 hectares of land are available for development in this area,” said the JLL specialists, who added that office and residential investments are the right choice for this part of town.

“A number of investors have already shown their interest in this section of Bucharest, considering that up to now the appetite has been muted due to the lack of subway lines, with the areas being central,” they added.

The first section of the fifth subway line linking Eroilor and Drumul Taberei will run for close to 7 kilometers, and have 10 stations and a depot.

In the first stage, the areas set to benefit more will be Eroilor and Razoare, followed by Drumul Taberei, said Valentin Lupu, associate director, capital markets at Knight Frank Romania, the real estate consultancy. Consultants say the subway line will also support the center-west of the city, which has become popular among office developers, with more than five projects under construction here at present.

Travelling the whole of the line should take less than 15 minutes. Construction works started in 2011 and were set to be completed in 2014, but the deadlines were constantly extended.

This time, officials at Metrorex, the operator of the Bucharest subway, told Economica.net that the new line should become operational in the first quarter of 2019. The developer of the line now needs to install the safety and automation systems. Siemens and Alstom are competing for the contract.

“I think that Drumul Taberei will be rejuvenated, both in terms of perception and traffic, following the opening of the subway line. Any modern real estate development brings something new to the city, and the connectivity with the cultural and historic center will have a strong urbanizing impact,” Andreea Paun, managing partner of Griffes, the real estate consultancy, told BR.

The total cost of the line stands at more than EUR 600 million, with construction being handled by an association comprising Italy’s Astaldi and Spain’s FCC Construccion alongside Romanian firms Delta ACM and AB Construct.

The project is being financed by EU funds and the European Anti-Fraud Office (OLAF) said in early February it had opened an investigation to check the development of the line.

Meanwhile, in north Bucharest, developers have been kept busy over the past few years and the hotspot for new investment has moved to the area around Expozitiei Boulevard, which doesn’t have a close subway connection. Nonetheless, the new subway line connecting Bucharest to Henri Coanda airport will cross this area and might generate fresh office and residential investments.

“At the start of 2018 some transactions for the acquisition of land were sealed in the Baneasa area, close to the Tokyo and Washington (future names – e.n.) lines. These land plots will host multifunctional complexes, but also offices, with a projected stock of over 50,000 sqm delivered in Baneasa alone,” said Paun. In the Piata Presei-Baneasa area, some 200,000 sqm of offices will be delivered in the next few years from 2019, according to the Griffes managing partner.

The development of some projects has already started in the Pajura-Expozitiei area. Companies such as Portland Trust, GTC and Atenor have secured land to build offices, while Impact Developer & Contractor and Futureal will invest in the residential market. Iulius Group, which has been developing mixed-use projects with a strong office and commercial focus outside Bucharest, is planning an investment in the Piata Presei-Expozitiei area.

GTC, Impact Developer&Contractor and Atenor Group have bought land in transactions worth around EUR 10 million each, according to Colliers data. The consultancy adds that this area has seen most of the land deals for office developments in Bucharest.

“Developers already present in the proximity of the origin of the sixth line (1 Mai station) have already started the development and have the first preleases, and it’s probable that other players that bought land to start their development without the subway (presence – e.n.) did so in smaller stages and with a bigger pre-lease rate in order to reduce risks,” Lucian Opris, senior associate, office agency at Colliers International Romania, told BR. From his perspective, developers might get a premium exit price if they decide to sell once the new subway line is operational, but this will not be the decisive factor in starting the investment.

Opris also believes that the office projects located on National Road 1 will also get a competitive advantage once they get a subway connection.

“For areas further than Jandarmeriei Street, residential will be the main beneficiary. In addition, I believe that experienced office developers will not make very bold moves. Some of them might make speculative purchases of land (at the best possible prices) close to the planned subway stations and they will watch the evolution of the new line and the authorities’ activity,” said Opris. With the fifth subway line set to open after five years of delays, investors are likely to be concerned that the sixth line, to the airport, might also rack up missed deadlines.

The new airport line will have a length of 14.2 km and 12 stations. The authorities have already secured full financing for the investment with more than EUR 1 billion coming from the EU and another EUR 300 million from the European Bank for Reconstruction and Development (EBRD), according to representatives of the Ministry of Transport. The line will have a transport capacity of 50,000 passengers per hour.

Meanwhile, the authorities hope to finish the train link between Gara de Nord and the airport by 2020. The existing rail line stops 2 km short of the airport. The state wants to build a tunnel below DN 1 and a train station at the airport to finish the project. It seems almost certain that passengers will be able to take the train right to the airport before getting the chance to ride the subway.

“If we carefully map the geography of the planned line and the existing developments, we see that outside the Baneasa node, where there is already a crowd of projects and construction, towards the north we have serious limitations regarding the availability of land that can be developed,” said JLL representatives.

The consultants pointed out that the residential segment might develop north of the airport in the Corbeanca and Balotesti areas, if the authorities build a large car park at the end of the subway line. This would help the inhabitants of this part of Ilfov County commute into the city more quickly.