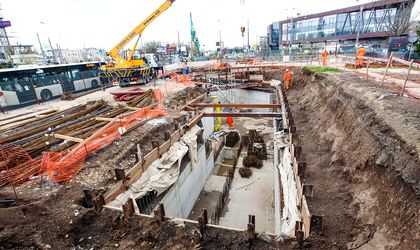 Driving in the Bucharest traffic can be a nerve-racking experience to this day, and not just at rush hour. The Romanian capital’s City Hall is working on massive projects that – at least on paper – should make motorists’ lives easier and public transit more efficient.

However, on the ground the reality is more complex and the constant delays in the construction of new road and transport projects are leaving the citizens of Bucharest to watch in disbelief as projects move at a snail’s pace.

Let’s take for instance the case of the passage from Piata Sudului, in south Bucharest, where construction works are still under way and the new deadline for finishing the project has been pushed back to March 2017. Due the constant delays, the municipality will lose close to RON 100 million of EU funds and will have to cover the cost of the rest of the works from other sources. Construction of the passage, which is designed to be 356 meters long, started in May 2014. A consortium comprising Astaldi and Euroconstruct are handling the development of this key infrastructure project.

The consolidation works on the city’s Triumphal Arch have a similar story. The project should originally have been finished in March 2015 and the municipality risks losing RON 22 million of EU financing if it is not completed this year.

Ionut Ciurea, vice-president and executive director of the Pro Infrastructure Association, tells BR there are numerous obstacles to the development of such projects.

“In practice, each project has a set of specific issues, from ensuring the financing to the movement of utilities (the water-waste water network and electricity, mainly). In the project preparation stage more attention should be paid to details – the feasibility studies need to be of quality so as to prevent any future issues. The authorities should cover the financing, issue building permits, carry out land expropriations on time and handle the bureaucratic side of EU-funded projects to avoid missing deadlines and having to provide funds from the public budget (such as in the case of the Piata Sudului passage and the Triumphal Arch),” Ciurea told BR.

More than EUR 2 billion of EU funds available for Bucharest

At present, the municipality has a list of large-scale projects that are capital intensive, such as the new subway line linking Bucharest to Henri Coanda Airport or the upgrade works to the district heating system.

The mayor of Bucharest, Gabriela Firea, travelled to Brussels in early September, to meet with the European commissioner for regional policy, Corina Cretu, and make sure that the executive arm of the EU knows what projects are being debated locally.

According to Cretu, close to EUR 2.3 billion has been allotted to Bucharest for the 2014-2020 programming period that can be used to finance a handful of projects, including a waste water treatment plant and a new public waste management system. The Romanian commissioner underlined the fact that there were delays to projects carried out in Bucharest in the previous financing period.

“I made a recommendation to the general mayor (of Bucharest – e.n.) to develop a plan for the implementation of projects with EU financing, with deadlines and a clear distribution of responsibilities and to start the preparation of projects for the period 2014-2020 as soon as possible,” said Cretu.

According to a calculation by Romania Libera newspaper, the combined delays in carrying out investments in the city amount to 72 years. For instance, the subway line to Henri Coanda airport was announced for the first time in 2006, while the actual construction could be finished at the earliest in 2021, according to the former minister of transport, Dan Costescu.

Shortly after becoming mayor, Firea announced new deadlines for ongoing projects, but in the meantime she has also had to do some explaining – for instance, she denied that she had ordered trees in parks to be chopped down and that she had stopped children from drawing on the pavements in the city’s public parks.