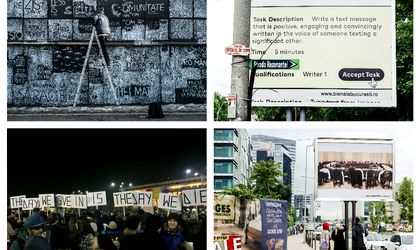 Nowadays, galleries and museums are attracting more public interest – at least, people read about them and like the idea, but often without actually going. If there are walls and an entrance fee, that piece of art isn’t so public, making us uncomfortable about commenting on the content. However, in the street where we live, the supermarket where we shop, the square through which we walk, many of us believe that we have a right to give an opinion. What about Romania’s public space? Is there a place for art? Business Review tried to find an answer.

According to Sinziana Barbieru, managing associate at ONV Law, the Romanian notion of “public space” is generally understood as a space accessible to the public or for collective use, regardless of form of ownership or right to access. However, the concept of “public domain” is strictly correlated with the owner of the goods in question, movable or immovable, and includes the state’s public and administrative-territorial units, governed by Law no. 213/1998 on public property goods. “Goods in the public domain and territorial administrative units are listed as such in normative acts (…) which are declared as such by law or by decision of the county council or, where appropriate, the local council. The other assets owned by state or territorial administrative units, that are not part of the public domain, are considered to be in the private domain and are subject to the ordinary law on private property, unless the law states otherwise,” added Barbieru.

In a more descriptive way, going beyond the general law-based definition, “In public space, as we understand the concept, the ‘space’ has some attributes as being never perfect, never complete or altogether comprehensive, never final, but always tentative, wanting, deficient, incomplete, unnerving – representation is failure, representation is loss – and yet capable, versatile, illuminating, productive, and life-saving. Also, it can be used as an alternative to the private – a way of consuming society, politics or culture. Public is for all, but the space is not, since the space has a memory, a collective memory which can be forgotten,” politologist Eugen Radescu (specialized in moral relativism and political ethics), cultural manager, curator and theoretician, who is best known to the public for the Bucharest Biennale, told BR.

Worldwide, art in public spaces is becoming increasingly fashionable, and it has never been so important to make it better. But what should the work be? Is it for an existing community with an existing identity, or a new community whose identity can be influenced by the commission? Is it going to be permanent or temporary? Art historian Erwin Kessler gives some insight: “Since antiquity, one of the longstanding procedures of controlling and taming the irrational and menacing public space was its penetration and regulation through monumental works of art, convincing yet aesthetic, tolerable landmarks of the power in place. Art in the public space is a paradoxical matter: it both aspires to inoculate positive, conservative values (like every manifestation of power guided by a regime), of the kind of awareness, awe, patriotism, fear, and it presumes the concomitant instillation of contrasting values such as liberty, inner enthusiasm, and subjective pleasure. This is why, most often, art in public spaces, from the dull statues of various ‘pater patriae’ to the current, engaged, progressive street art, risks being ‘kitsch’. The very rare instances when art in public spaces turns into art on a private, inner scale, are maybe the major token of a shared, social transcendence, able to fuse together inner self and public psyche into civic identity.”

Occupying the streets with new forms of art

Nowadays in Romania, some serious civil society alarms are sounding. For more than three weeks, Romanians have occupied the public squares and nearby streets to protest the government’s new laws. The most important media outlets from around the world have been supportive, transmitting Romanians’ demands of its newly-elected government. Out there, every night, it’s a creative festival of placards with messages for the government. Yes, we are creative and we demonstrate it every single night. However, the interesting thing is, we are currently protesting in Piata Victoriei, not in Piata Universitatii, the point zero of democracy since the Romanian revolution in December 1989, where we used to. The giant giraffe (which stands outside a museum) is currently a democracy landmark. It’s a meeting point for the demonstrators. And it’s watching the government building, bringing new symbolism to Piata Victoriei.

“The public space in Bucharest today is not the same as the public space in Bucharest in 1988, 1989 or 1990. Extension, shrinking and distortion of the public space is inherent to its nature of being public. Everything public is heteronymous and unpredictable, as it is a space where mainly trans-individual behavior unfolds. Only the totalitarian (non-public, as it is the full property of the system in power), public space is deemed to be static, controlled, predictable. This was the case with Romania before December 1989, and with North-Korea until today. The authoritarian, non-public public space was typified by the violently imposed positive, constructive, and optimistic features, in the pattern agreed by the regime. The non-public public space is typically a place of (pre-determined) consensus. No dissent is permitted. When dissent surfaces, the non-public public space shows its nature of private space, owned by the regime (manifesting its power like in Universitatii Square or in Tiananmen). Conversely, the really public public space welcomes dissent, as is the case with the ‘Occupy’ movement on both sides of the ocean, a few years ago, or with the Bucharest Piata Universitatii and Piata Victoriei nowadays. These movements attest to the recent tendency of appropriating public spaces out of ideologies, for truly (and sometimes disquieting) usages, from camping to cooking, teaching, debating, art-making or even sex-having,” adds Kessler.

Getting arty on billboards

With the curatorial concept “What are we building down there?”, last year’s Bucharest Biennale (BB7) highlighted the themes of privatization, commercialization and corporatization of the post-socialist city, displacing the biennale onto 21 advertising billboards. “Because the billboards are all over Bucharest, from Pipera to Piata Muncii and Colentina, not only the visitors interested in the biennale, but everyone around Bucharest, will be able to learn about the city and the works of art that tackle issues ranging from privatization to urban planning and our relationship with the places that we live in. Staging an exhibition entirely in a public space will bring art and the ideas behind the works closer to anyone and everyone living in or visiting the city, potentially attracting a lot of newcomers to the art world who might not usually visit museums, galleries or art centers, allowing us to present the biennale to a much wider audience,” said Gergo Horvath, co-director of the Biennale, at the time. And the impact was amazing.

But what’s really happening downtown when it’s about advertising, not art, in public spaces? “Speaking of media exposure in Bucharest’s public space, we can easily notice that we’re dealing with overexposure, with too many billboards changing display locations too often,” said Felix Tataru, global president of the International Advertising Association (IAA) and president of GMP Group Romania. “From my experience with the IAA, I would recommend predictability and reducing the display areas. By reducing the outdoor area in Bucharest by about 55 percent, we would obtain two positive effects. The first one is an increase in credibility of the outdoor category. Outdoor is currently underestimated in Romania, as overexposure leads to lower impact and efficiency. Lack of predictability means that impact cannot be measured, since new billboards appear and disappear overnight. To be predictable means having a certain number of billboards for a certain area with measurement tools for them. This measure would increase audience, impact and clients’ investments in this category. It would also increase the quality of the exposed materials – for instance digitalized outdoor. The second advantage would be the aesthetics of Bucharest, of its urban architecture. There are cities that have already done this: London, Paris, Berlin. There is also Rio as a real case study. They banned outdoor advertising and have artists decorating the city.”