Almost 70 pct of Romanian startups use personal funds for kickoff 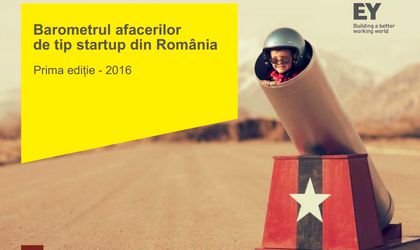 Some 69 percent of entrepreneurs used their own funds to start a business in Romania, according to the 2016 Startup Business Barometer study by EY and Impact Hub. These numbers are close to the ones registered in the United States, where 73 percent used their own savings, based on data from the Global Entrepreneurship Monitor 2012 US Report.

Personal funds include savings, loans – including personal loans – and salary received from another job than the startup. Romanian startups also use EU funds and grants offered by the Romanian state, while funds from family and friends come in on the fourth place.

However, even though EU funds hold an important place among financing sources for local startups, only 15 percent of respondents want to access European funds this year, while 13 percent intend to access government programs for startups.

An even smaller share of Romanian startups look to venture capital and private equity funds for their financing needs, these sources coming in last.

After starting their own business, Romanians spend on average 10 hours per day working for it. This is 21 percent more than full-time employees dedicate to their jobs. According to a study by Eurofound, Romanian employees worked in 2014 more than employees in the European Union, reaching 41 hours worked per week.

At the same time, 27 percent of entrepreneurs exceed the limit of ten hours, some of them reaching even 18 hours of work every day.

However, long hours do not guarantee a high pay in some cases, as 38 percent of respondents in the study said they have a monthly income below EUR 500, with only 11 percent exceeding EUR 2,000 per month.

This is still better than the average net income in Romania, which in November 2015 amounted to EUR 432.

301 Romanian entrepreneurs who have been running businesses for less than three years responded to the study. Most of the entrepreneurs (66 percent) were aged between 25 and 35 years. Business people over 35 years held a 19 percent share, while 15 percent of respondents are under 25 years of age.