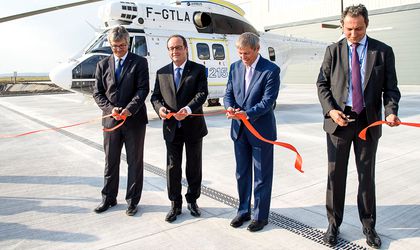 Airbus Helicopters, part of the Airbus Group, the commercial aircraft producer, opened on September 13 its first production unit for the H215 helicopter in Ghimbav, near Brasov.

The 10,000 square meters facility was constructed following a EUR 52 million investment, including state aid provided by the the government in Romania.

French president Francois Hollande and Romanian prime minister Dacian Ciolos took part in the official ceremony. Both discussed about the significance of this beginning and the benefits it brings to both Romania and France in terms of higher revenue and newly created jobs.

Ciolos said that the manufacturing of helicopters from scratch in Ghimbav would encourage the development of a technology hub in the area.  The production at the unit would start in 2017 and by 2020 the company plans to build 15 type H215 helicopters per year.

“The intention is to encourage the development of a platform, of a hub in the aeronautical industry, starting from Brasov, and of course, with the participation of other producing enterprises from Romania (…). We’ll have a product that will be finished here, the company that will produce it will have not only the factory here, but also, a study office, a sales department, but also the professional training component, which is very important for the future of the enterprise,“ said Ciolos.

“It’s an important investment for Brasov and for this region, of over EUR 50 million, which creates 350 new jobs, added to the already existing 150 jobs (…)  it’s a beneficial investment both for the investor, but also for Romania, making it known for the helicopters producers for a new product, that we hope to see it active as soon as possible. We’ll carefully analyze this offer for us also. Its advantage is that offer maintenance here in Romania. We have an analysis also at the Ministry of Internal Affairs and the Ministry of National Defence where there is already a need for intervention helicopters, for multiple roles,“ added Ciolos.