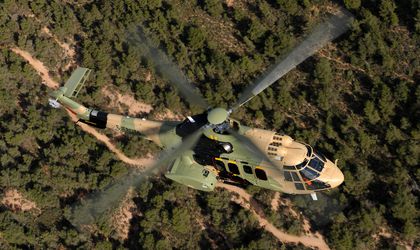 Airbus Helicopters and IAR have signed an exclusive cooperation agreement for the heavy twin engine H215M multi-role helicopter. Under this agreement IAR will become the prime contractor for the H215M for any future order by the Romanian Ministry of Defense to replace their ageing fleet.

“We are proud to have signed this general agreement that results from almost 50 years of cooperation between IAR and Airbus Helicopters,” said Neculai Banea, General Director of IAR.

“IAR has built  around 360 helicopters under license thanks to this successful partnership with Airbus Helicopters and we are looking forward to customizing and supporting the H215M,” he added.

“This agreement is an important milestone in the construction of a European defense partnership. We are convinced that this relationship will last another 50 years and that the H215M will correspond perfectly to the needs of the Romanian armies” said Olivier Michalon, senior vice president, head of Europe region.

IAR Brasov is a majority state-owned company, a Romanian national leader in aeronautics, specialized in helicopter manufacturing and maintenance. In 2016, it generated revenues of EUR 34 million and employed a workforce of around 316. IAR Brasov offers a wide range of services for the Romanian army, as well as for international customers, such as mainly maintenance, repair and upgrade of military helicopters and supply of spare parts.