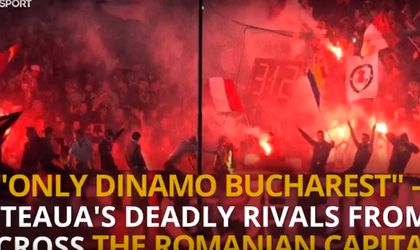 The members of Art Directors Club (ADC) Romania decided that the idea of the Dinamo Supporters (Galeria Dinamo), with the stunt organized at the play-off game in the Championship League Steaua – Manchester City, deserves the number one spot in August’s ADC ranking that includes the best ads and creative ideas.

The game on the National Arena started initially with a choreography whose message seemed to be created by Steaua’s fans, but instead it transformed itself in a message supporting Dinamo.

“I chose to give this idea the maxim scoring because it succeeded in surprising in a huge way. It made everybody talk about it and many rivals applauded it. I appreciated a lot, besides the effect, the meticulous work prior to the game and the patience to buy in time the rival’s trust, necessary on order to make this prank possible. I appreciated the instant buzz that the idea produced, not the team behind it. This is how the communication should function at its best – so as not to sense the construction behind it. So far, I believe that it is this year’s best stunt,” said Razvan Capanescu – chief creative officer McCann Worldgroup Prague & ADC RO Member.

Graffiti BBDO and Jazz are the agencies to get the second and third places in the ADC ranking for August.

On the third place came „Repornește-te” (Restart Yourself) campaign, created by Jazz for the LITOMOVE brand, a drug for the joins’ health. The campaign succeed in presenting in a very unique manner Stan Turcu’s story, a 68 years old pensioner that is training for the ultra-marathon of 166 km that will take place in the Alps. For the campaign worked Alexandru Buta (Art Director) & Valentin Suciu / Andrei Stanciu (Copywriter).