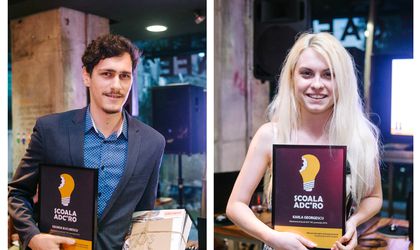 The ADC*RO School registered 22 graduates during this year’s session. Their works were evaluated by a board that comprised some of the best creative directors in Romania.

The 8th edition was translated into three months of sustained creativity, 2 weekly meetings, 10 tutors and 12 sessions with the creative directors.

The graduates that received the highest scoring after completing the briefs were: Karla Georgescu (the winner of the Grolsch scholarship of the beginning of the ADC*RO School), George Bucurescu, Raul Gheba, Irina Gutan, Cristina Cazacu, Ana Maria Mocaita, Georgiana Anghel, Andreea Calarasu, Irina Tanase and Miruna Anton. They will have the opportunity to work as interns for at least a month in the advertising agencies involved in the project.

“Everything I’ve done so far is a good start, but the real work is just starting, when your ideas and your campaigns are fighting the reality,” said Georgescu, valedictorian of the ADC*RO School 2016.

Alongside the 10 awarded portfolios, the tutors have chosen winners for each of the major communication media. Therefore there were given awards for Best of video, best of radio and Best of BTL to Karla Georgescu, Best of Radio also to Raul Gheba, Best of Print, Best of Digital and Best of Integrated Campaigns to George Bucurescu, Best of Outdoor to Serban Roman, Best of Innovative Media to the team formed of Cristina Cazacu, Georgiana Anghel, Horia Ionescu, Serban Roman and Irina Tanase.

Moreover, Karla Georgescu went home with another two special prizes: 2 invitations to the Untold Festival, for Best of BTL and a smartphone HTC One from Vodafone for Best of Video.

„We are the only creative school in Romania that prepares, year by year, very qualified juniors for the Romanian agencies. More than a half of our graduates are finding are job after finishing the school and many of the ones that have graduated the first editions are now really well known seniors in the industry. They are people that have done efficient campaigns for clients, that brought international awards to Romania and that represent a certainty for the industry. I am proud that ADC*RO has been contributing all these years for the future of the communication industry and I consider myself to be privileged that this year I could offer form by knowledge to the future professionals of the industry,” said Eugen Suman, ADC Romania’s president & creative director of Kubis Interactive.

Starting this year, in the memory of Ionut Popescu, art director and photographer, that has lost his life during the fire in Colectiv, ADC Romania created the scholarship “Ionut Popescu”. Its value is of EUR 500 and is offered to the person that finishes first the Creativity School. In the 2016 edition the scholarship was given to George Bucurescu, the winner of the second place, due to the fact that the first place winner, Karla Georgescu, received the Grolsch scholarship.

Moreover, this year, the ADC School launched an extra module dedicated exclusively to the school’s students with the desire to prepare them for the national an international competitions. The first edition of the Olimpiad (OlimpHell) represented 8 weeks, almost 1000 ideas and 7 resolved cases, by 5 teams. The results were already visible at Young FIBRA and Future Lions.

All the graduates’ portfolios will be uploaded on the school’s website.