A look at the fourth Romanian Design Week 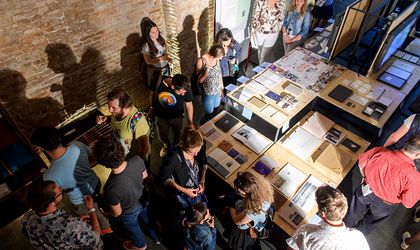 Some 150 Romanian designers in the central exhibition alone, 50 side events, Night of the Architectural Offices and, for the first time, Night of the Advertising Agencies. All these will form part of the fifth Romanian Design Week, due take place in Amzei Square, and a platform for key figures from the local design scene to share their take on future trends in the field.

Over time, Romanian Design Week (RDW) has become a major multidisciplinary event for the creative industries in Romania. This the first project dedicated entirely to Romanian design that addresses both the general public and professionals. The annual event includes the events and spaces that promote design and all of its disciplines: architecture, graphic, fashion and object design. “First, we wanted to organize a multidisciplinary festival which could exhibit and award the best works in architecture, design, advertising, photography, etc. But, because our main objective was to build a community of Romanian creatives, we chose to drop the idea of a competition and, from research and discussions with important people in those industries, we got the phrase ‘Design Week’,” said Andrei Bortun, CEO of Millennium People & The Institute.

Running from 20 May to 5 June, the event will encompass the central RDW exhibition, as well as a series of side events, projects and thematic events, parties, launches, workshops and conferences, plus trades and capsule displays. It will take place within the central displays, dedicated to famous artists and designers, and a series of conventional and unconventional spaces, art galleries, design studios, showrooms and workshops.

The event is also expanding into new areas. The biggest news, which the organizers hope will make a big splash, is the location: Piata Amzei. This is not just because of a lack of venues in Bucharest: this way, the project will highlight a problem and, with the help of the event, the organizers hope to be able to change this situation into an opportunity for the creative industries and for Bucharest. “This main period of the event is very important, not only for the objectives of this project, to offer visibility to Romanian design, but to redefine the paths that led to Piata Amzei for years, paths that have been covered during the last ten years, leaving a white stain over a place at the crossroads of the three most important boulevards in the city, in the middle of a square framed by the major markets in Bucharest,” said Bortun.

Last year’s event attracted more than 20,000 visitors, and involved over 60 satellite events and more than 130 designers in the central location, and this year is hoped to be bigger still: 150 Romanian designers, in the central exhibition alone, 50 side events, Night of the Architectural Offices and, for the first time, Night of the Advertising Agencies. Based on previous years’ experience, each of the ten architectural offices and tens of advertising agencies will draw in hundreds of visitors who they hope will find projects, people and talent in unexpected places.

“I feel that important changes are about to come in our way of life and in our cities. People look more optimistic, more relaxed, more respectful, more interested in nature and how to protect it. I think those changes in people’s way of being are directly reflected in the way we imagine and construct our buildings and our public space,” said Adrian Soare, curator of the category “Architecture, Interior Architecture & Urbanistics”.

In his turn, Ovidiu Hrin, curator for the “Graphic design & Illustration” category, has his own vision based on the way “design”, “branding” and “creativity” have had their meaning diluted. He says he has tried to see what they will represent tomorrow. According to Hrin, the contemporary creative hype allows more and more things to pass as design, but only a few of them are the results of strategic thinking, effort, of a process of searching for, testing and identifying sustainable solutions. However, he believes designers are still able to form opinions, influence behaviors and improve the way we interact with the overwhelming amounts of information around us. When it comes to the responsibility of the designer, Maurice Munteanu, curator of the section “Fashion Design”, is a great believer in the new wave of talent knocking on the Romanian design door. He points out that there are names in this industry that are famous at international level and that have proven they can perform at high standards, designers with a fresh vision that can see trends and also push them on the market. “We have always tried to have a panoramic view of the phenomenon, especially in order to present the public with a realistic and objective selection. We are focusing on the designers that really have a voice, that have passed the consequence test and that can treat fashion as a job, not only as a form of art,” Munteanu added.

Choosing the pieces is not an easy task. “We are focusing on fresh ideas, both from established and young designers with a focus on products and prototypes that can easily be put into production considering the constraints of the local industry and the income level of most Romanians. The new location will expose Romanian design to new audiences, with more space to show products and also showcase brands (we already have some companies with a very coherent business direction like Ubikubi or Dare To Rug),” said Mihai Gurei, creative director and owner of Intro.

In his turn, Soare believes that every year the RDW team tries to select the most meaningful projects, no matter their scale or budget. “What is interesting is that this selection is made by a heterogeneous team of individuals with different backgrounds. We search for projects and architects that question the sense and meaning of building. We don’t look for architecture as pure art, but for architecture that integrates creativity, responsibility, nature, the site’s history and social understanding in a mix that is both fresh and timeless,” said Soare.

“I think we are tempted to immerse ourselves in a visual extravaganza, that we spend too much time honing our technical skills in order to master ephemeral style trends while we forget that we live in Romania, we forget that graphic design is also in the traffic signs, the street signs, in the documents or web pages of the official institutions. This is why, in selecting the pieces for the Graphic Design exhibition, beyond the stylistic execution and the visual coolness, I appreciated the programmatic thinking, the process, the responsibility taken to understand and address the need – a possible key in finding the true meaning of the designer,” added Hrin.