A ghost story: The deserted office buildings of Bucharest 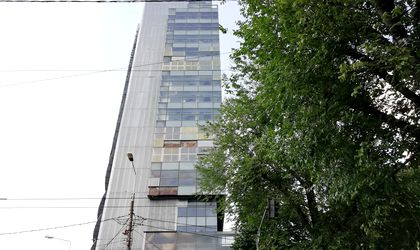 This year, the Bucharest office market will reach 2.9 million sqm, according to Cushman&Wakefield Echinox. The vacancy rate is also dropping, as the current 7.7 percent is less than half the level recorded three years ago, when empty buildings were almost everywhere in the city. Still, empty offices remain on the market, and places like the Millennium Business Center or Cathedral Plaza are well-known for being abandoned.

The 18-storey high Millennium Business Center, at a height of 74 meters, developed close to Armeneasca Church, was a controversial project from the beginning, as the building was basically attached to the parish house of the church. The construction began in 2001, but later the works were stopped, as the developer entered litigation with the church whose structure was affected by work. The litigation was dropped in 2003 after the developer paid damages of USD 790,000. The German investment fund DEGI (bought in the meantime by UK based Aberdeen Asset Management) acquired the office building in 2007 from the British investment fund European Convergence Property Company, which had also bought it a year earlier from Antonis Kapraras and Euroestate, a company controlled by the Kanellas family in Greece.

And the bad luck continued.

Two years later, in 2009, the building caught fire, with around EUR 20 million in losses. Almost 10 years later, the building is in the same state. It seems that the owner wasn’t compensated by insurers because the investigation did not reveal the exact cause of the fire.

Delivered in 2010, the 24,000 sqm Cathedral Plaza had issues with the Archdiocese of Bucharest, who opposed the construction after an initial agreement. Developed by Millennium Building Development, a company controlled by Israeli businessman Eyal Ofer, the building was finalised in 2010, and its war with the Catholics went to the courts.

The EUR 60 million building’s case was opened in 2006 by the Roman Catholic Archdiocese in the Bucharest Court, its representatives claiming that the neighboring tower is dangerous for St. Joseph’s Cathedral – a historical monument. The file was transferred to Constanta, Craiova, Pitesti, the Constitutional Court of Romania (CCR), Targoviste, Ploiesti, Suceava, Alba Iulia and Iasi and has been sent to European Court of Human Rights several times.

The building was acquired by real estate investor Ioannis Papalekas in 2013, just a month after the court ordered the mayor of Bucharest to order the demolition of the Cathedral Plaza.

But for now, the building still stands, empty.

When the market hits

But the city doesn’t just have victims of fate, but victims of business as well. Buildings with bad locations, like the Cubic Center in Pipera, are occupied only around 50 percent. The same thing happened with Twin Tower Barba Center, put on sale few years ago for EUR 60 million and a up for rent at about EUR 5/sqm/month – to no end.

There are also larger buildings where construction was started, such as Anchor Plaza Metropol (about 34,000 sqm) and another building in Otopeni (27,000 sqm), which have not yet been completed, and remain almost empty.

Some of these buildings were started back in 2006-2007, when the market seemed to accept everything, but the crisis changed the reality. Not only because of the unfortunate location, but also due to the fact that they are already old buildings.

“I would say there are two reasons why there are such buildings. The main cause is litigation, and the fact that until the cases are settled the buildings can not be rented out. The second reason is starting construction with a purely speculative approach, with no pre-contracts, in locations that either do not have all the features required by office occupants, or where demand is lower, ” Florian Gheorghe, head of Research at Activ Property Services agency concluded.