BR Analysis. A crisis on the Romanian residential market? Not yet, but some of the signs are there

After four and a half years of continuous growth the Romanian residential market hit its first obstacles. The ROBOR reached 3.13 percent on Monday, from 0.84 percent 12 months ago, while the National Institute of Statistics (INS) announced a 24 percent drop of the volume of constructions in the first four months. In the same time, the government backed Prima Casa program seems to loose its pace. Is there a crisis on horizon?

And there might be an explanation. Acccording to Bogdan Voica, CEO of Coldwell Banker, the share of the middle market residential projects has increased in the total offer in Bucharest from about 17 percent in 2015 to about 46 percent this year. And, this projects are not necessary included in Prima Casa. That could explain, at least partially, the slow pace of the program.

Another sign of a potential crisis is the serious drop of the construction in the residential market by 24.7 percent in the first 5 months of the year. Almost a quarter, a very bad and hard to explain sign. The INS doesn’t say if there are areas that influenced the average, their data are for all the market. Something must have happened.

”Every year there have been delivery delays in Bucharest from a few weeks to several months. These delays were caused by the optimistic delivery times originally announced, by the difficulties encountered in the labor market in construction, and by the difficulty in preparing minutes for the reception of works, about 10 percent percent of the estimated supply year record delays, according to our data. There are no known causes that led to a decrease in the pace of construction on the residential segment at the national level in the first months, in the context when Bucharest started building several large projects. 2018 still benefit from all the premises to be a better year compared to 2017 in terms of home deliveries in Bucharest and its surroundings,” Voica states.

And that might be an explanation, but it can’t be for the whole 24.7 percent drop. Still, there is another. The missing workforce.

”The decline in residential construction stems primarily from the unprecedented labor force crisis. Demand is still high, developers announce projects and want to invest, but the pace of the work has slowed down, which implicitly leads to a decrease in deliveries. On the other hand, this still puts pressure on demand,” Andreea Comsa, managing partner of Premier Estate agency, thinks.

The causes of a 3.13 percent ROBOR are known, but the situation has the power to kick back the residential market, expanding the costs of the credit. 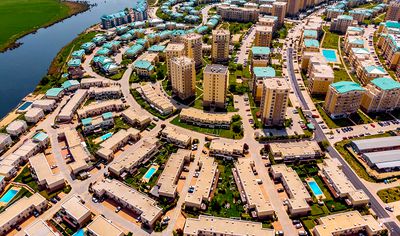 Read more about
Cosmopolis completes the acquisition of 15.6 hectares of land
read more

”The impact of the increase in interest rates is obviously higher on the mass market segment, where sales prices are lower and, implicitly, the potential buyers’s incomes. But net average wage growth was over 10 percent nationwide, Bucharest being the region with the highest wages nationwide – over RON 3,000 per month. In view of these statistics, the increase of ROBOR itself is not yet a single reason to lead to a decrease in transactions but, corroborated with other elements, both in the national and global macroeconomic context, may lead to a postponement of the acquisition a new home,” Voica suggested.

The problem of the residential market is the extreme sensitivity. If the economy has problems, the house market responds almost immediatly, and the decision to buy is fast postponed.

”The real estate crisis that had its roots in the financial crisis of 2008 is still alive in the collective memory of buyers. The increase in the ROBOR index is reflected directly in the acquisition intent. Paradoxically, this, because it puts pressure on demand and tempers it, is not necessarily negative in the current market conditions because it tempers the rise in prices”, states Comsa.

”We notice, if we talk about Bucharest, that we are still developing and are starting new large projects, which have scheduled the delivery of at least several hundred units annually. We believe that all the phases that are under development at this time will be completed and a possible unsatisfactory sales rate will result in a delay in the start of subsequent phases. Absorption rates are still satisfactory, developers with whom we have contacts have a high degree of financial liquidity and have done their calculations thoroughly. At this time, there are and will certainly be projects that will not record the expected results, especially because of bad business plans and as a result of poor marketing strategies and sales,” concluded Voica.

There are, of course, signs the economy itself is hit by poor policy decisions. The problem is that the time we are speaking about gets shorter every day. But how the residential year will end?

”This year there are all the premises – high demand based on a real need, downward delivery due to the labor crisis, many new projects, rising financing costs and the exchange rate, the market to have a moderate or stagnant trend. Although demand is high, prices will be kept in the face of high competition and the evolution of macroeconomic indicators”, Comsa concludes.

Raluca Mihaila (Utopic Brain): The moment we live now is about breathing in...