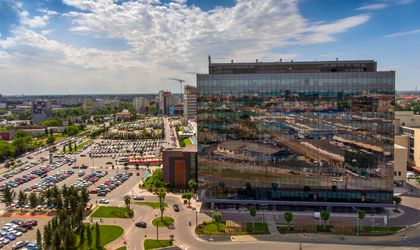 A gargantuan park in the middle of a real estate project? This is possible in Timisoara, where the IULIUS Company is currently developing the Openville mixed-use project. The park spanning on over 55,000 sqm will be the main entertainment element of the development, a novelty that the people in Banat have been expecting for a long time now and that will provide them not only with an outdoor relaxation venue located in the very heart of the city, but also with numerous entertainment options.

Openville is a “green” project both literally and figuratively. The park will include a spectacular landscaping component that will perfectly combine with the mix of office and retail spaces. Over 20,000 shrubs and 1,000 mature trees from various species will embellish and scent the area. Also here, the locals in Timişoara will be able to relax on the grass just like in the major parks from around the world due to the areas fitted with special traffic-resistant turf. The park will be a genuine relaxation oasis for the entire family, encouraging spending leisure time outdoors. It will include squares for events, promenades, children’s carousel, playground areas, a lake and artesian fountains. The park will be impressive not only in terms of its magnitude, but also owning to its original design, as it will be created entirely from scratch and located on an urban platform, over the upcoming underground parking facility of the project.

In addition to its recreational focus, the green area will also be a major anchor for the retail mix of the Openville project owning to the dozens of restaurants and cafés that will be located here. Designed based on specific themes, with vast terraces, the park venues will also delight the customers by means of the panoramic view overlooking the green space. Iulius Mall Timişoara, a colossal 350 stores shopping mall, will be integrated in the mixed-use project that, by the end of the construction works, will include 130,000 sqm of office spaces, 100 new brands, an events center with 4 halls, a magnificent park, and over 4,050 parking spaces.

Similarly to Iulius Mall, which attracts over 16 million people every year both from the west of Romania and from the neighboring countries, Openville will also have an impact across the borders. The retail area will be a unique development owning to the novelty of the proposed concept, which lays emphasis on leisure options by creating a synergic blend of indoor and outdoor attractions.

The retail segment will also be impressive in terms of magnitude: over 131,000 sqm and a total of 450 retailers available for shopping. The expansion works for Iulius Mall are due to start this year, with the shopping mall capacity virtually doubling due to the 60,000 sqm of additional retail premises set for construction. The major brands currently operating in Iulius Mall will be joined by new national and international brands, a multiplex cinema, a youth entertainment center, and the largest playground for children. The first office building (18,000 sqm) was opened this winter, 13,000 sqm are pending completion in the immediate future in UBC 1, while construction works are ongoing for another 18,000 sqm in UBC 3. Concurrently, the works continue for a multilevel parking facility, the first of its kind in Timişoara, with a total capacity upwards of 900 parking spaces and that will be completed this autumn.

The construction works are due to begin over the next period for two other class A office buildings (with a total of 55,000 sqm), as well as for the expansion of Iulius Mall.