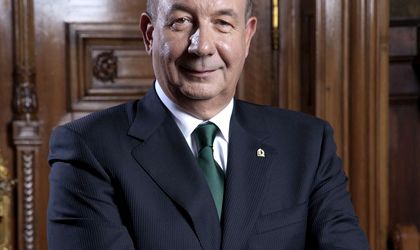 Everyone wanted to do business in the early 90s, in a wannabe capitalist jungle where no rules applied but the law of the strongest and the most connected. If trading was a hit in the early years of capitalism, very few businesses won the battle with inflation and unpredictable exchange rates. Only the visionaries made it, said the president of CEC Bank, Radu Ghetea, in an exclusive interview with Business Review.

How would you describe the first private Romanian businesses built in the early 90s?

Major steps have been made in the last 28 years. In the 90s, everything moved really fast because people were eager to do things that had been banned until then, more exactly, building a business, making their own decisions. Let’s not forget that Romania, during the communist period, had no private sector. But very few businesses managed to keep up and develop into a success story. For those who made it, it’s thanks to the perseverance and vision of the owners.

I had the chance to work closely with the private sector from 1994, when I left the Romanian Foreign Commerce Bank and transferred to Alpha Bank, where I worked for 13 years. The main issue that the economy was facing back then was the lack of regulation. Even the banking system had issues in registering the financial operations carried out by private companies. There were specific regulations for state-owned entities, but none for the private sector. I remember that business owners came to the bank with a bag full of money, demanding a currency exchange for lei to dollars or the other way around. The rules applied were different from one bank to another.

Why were there different rules for different banks?

The exchange rate was set by the National Bank, but everyone tried different approaches in favoring different transactions in order for companies to be more or less protected by the inflation rate that was huge and unpredictable at that time. I remember years when inflation was at 300 percent. The exchange rate for the dollar started at ROL 21 and, when the denomination of the leu occurred, one dollar was worth ROL 38,000. Everyone wanted to export their products back then. And it’s a trend that we still see today.

Some entrepreneurs understood that trading a product from one market to another, without any added value, is temporary business and they started production. A positive example is Mobexpert, a company that took advantage of a market opportunity at that time. Specifically, there were no good quality Romanian office furniture products. Mobexpert was the first in the industry that, apart from importing office furniture, bought a furniture factory and started production for export.

There are lots of examples of entrepreneurs with healthy initiatives that stood out from the beginning of capitalism. The businesses that were based only on imports and sales on the local market disappeared one by one because they couldn’t win the battle with the exchange rate and inflation fluctuations.

The leu-dollar exchange rate was liberalized in 1997, and the day after the announcement was made by the prime minister at that time, Victor Ciorbea, the rate almost doubled from ROL 4,000 to ROL 7,774. That was the market value of the dollar, and until then, the National Bank, according to regulations in that period, kept the exchange rate at ROL 4,000. It’s an important and interesting case study to get an understanding of the regulations and laws that determined the role of the National Bank then.

I should remind you that in June 1996, the National Bank took two club loans of USD 100 million and USD 150 million from the local banks in order to pay the country’s external debt. I would say that this amount was pretty small for a country but the national reserves were almost gone, and if the country couldn’t pay this sum the situation was not good. The National Bank paid the whole amount back to the banks with interest.

But the reason the country was in this situation was because, after the fall of communism, everyone stopped working, believing that capitalism would bring wealth just like that to the economy. Productivity was close to zero. A second opportunity came along then, for entrepreneurs, and for the economy – taking over bankrupted state-owned companies.

How was the privatization of the state-owned companies handled?

There were hundreds of state-owned companies that had too many employees, and the production no longer had a market, and I am referring to the Middle East and socialist countries like North Korea, Cuba, Nigeria and Somalia. Some of these countries never paid for the merchandise they acquired. The positive outcome from changing market conditions is the fact that exports based on debt were stopped. It was a complicated time back then, and only those that had vision knew how to take advantage and evolve.

There were three main ways in which privatizations were done in Romania: where the employees became shareholders, but the directors or engineers of those companies managed to buy up most of them and become majority shareholders; where foreign corporations came and bought the local company – like Erste Bank’s takeover of BCR; and where some local businessmen managed to buy some of the state owned companies that were for sale.

In my opinion, the privatization of state-owned companies was more of a demonstration of resilience by the Romanian authorities in order to get into the NATO Alliance and the EU. The privatizations were considered a step toward a capitalist market. For example, EBRD would agree to grant a loan to a certain state-owned company provided that it was privatized. When it comes to BCR, the scenario was the same – before the privatization, the EBRD and IFC (the investment division of the World Bank) became minority stakeholders and helped the state to prepare the company for privatization.

Did local businesspeople have enough resources to be able to buy a state-owned company?

Private capital was almost nonexistent at that time. Most of the entrepreneurs developed their businesses step by step by borrowing money mostly from friends and family. There wasn’t and there still isn’t a bank lending solution that finances the purchase of stock. The Romanian businessmen who were able to buy a state-owned company accumulated capital from commercial activities in the early 90s.

People needed bank loans. But, at that time, lending offers were practically nonexistent. Before 1990, corporate loans for state-owned companies were based on a multiannual investment plan. After the communist regime fall, every bank had its own way and criteria for offering loans to companies and individuals. And this is why some financial institutions went bankrupt, because they didn’t calculate the default risks properly. Years later, at the beginning of the 2000s, corporate lending products started to target production for existing companies. The financing of agriculture started late, after Romania became a member of the EU, and subsidies began to be paid to the farmers. Until then, agricultural businesses were ignored by the banking system.

When did banks start to see local businesses as potential clients?

I think it started slowly with the local financial institutions before privatization, and continued with the foreign banks that came to Romania later. They realized once they started to operate in Romania that there was demand for a new banking system, because the economy started to grow. But the local banking system has changed over the last 20 years, thanks to the tight and constructive relations between foreign and local banks. There have been occasional misunderstandings, but there was a common goal: to build a solid, healthy banking system. Also, the National Bank played it strict when it came to regulations. It’s true that the first target, in terms of clients, were individuals. And the interest rates were huge at the beginning: over 2001-2002 loans had 30-40 percent interest rates.

When did financing start-up companies become interesting to the financial system?

To this day, a financial institution will not grant loans to start-ups without bank guarantees. But the more financial aid is provided through national or international programs, the more access to lending new companies have. Young entrepreneurs will have financing facilities if they present guarantees. The Start-up Nation Program helps facilitate a relationship between a bank and a start-up, because the government takes on the default risk. The more programs developed, the closer young entrepreneurs are to being financed by financial institutions.

What kind of companies does CEC Bank finance?

Except gun production, we have no restrictions in terms of economic activity. We choose to analyze the business plan very carefully no matter the activity. We have a large range of lending products for SMEs and small agricultural businesses. We also finance projects developed by small local administrations. These are not very attractive to other financial institutions, which target only large administrations, and the competition to land these accounts is fierce. But we think that the default risk for any public administration is fairly small, and we want to encourage and support investment projects in small towns and villages in Romania.

Would CEC Bank be interested today in taking over a new private bank?

Until now we have based our strategy on organic growth. Acquiring new portfolios or entities could be a viable option at some point. It is not easy to merge two different financial entities. In the last 11 years, we have managed to have a positive turnover, without losses. We also increased the share capital by EUR 122 million. Our market share grew to 7.42 percent in 2018, from 7.16 percent in 2017. Last year we were the seventh biggest bank in the system. The new loans value is at RON 6.6 billion and the loan balance is at RON 17 billion. Individuals represent 33.5 percent of our clients, SMEs 40.1 percent, public administrations 19 percent and large companies 7.4 percent. Our goal in the last 11 years has also been to increase the volume of corporate clients, especially SMEs. The gross profit for 2017 was RON 222 million and the bank solvability is at 14 percent. It’s a good indicator of the bank’s stability but also a very big responsibility.