ADC*RO: These were the most creative ads/ideas in January & February 2018 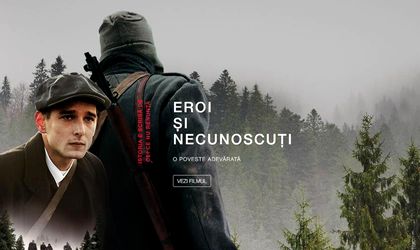 Top 3 ADC is back with the first two months of the year: January and February. The top awards the day to day work, ideas and projects done by agencies, freelancers or creatives in connected areas.

The January number one is the latest BRD campaign, dedicated to the celebration of 100 years since the Big Union. „Eroi si necunoscuti” (Heroes and unknown) is part of a series of BRD TVCs that are launched every year, in the first infomercial of January 1st. The TVC tells the less known story of the photographer Samoila Marza that on December 1st 1918 created, at Alba Iulia, the only photos from the Big Union day. The project was conceived by the agency Propaganda Creative Marketing, with Alexandru Lazar (Art Director), Roxana Panaitescu and Catalin Manciuc (Copywriters).

„A director such as Laurence Dunmore, a subject with an epic inevitable vocation, an excellent sound-design, a good promotion website and a TVC that convinced many that is the trailer of a movie – the story of Samoila Marza succeeded in gathering on YouTube more than 3.3 million views. But more important than anything, the fact that a real character is more famous now than before. It seems that the history of advertising is written by those who don’t give up. Congratulations to everybody!,” said Marius Tianu, ADC RO member.

On the second place is the McCann Worldgroup Romania initiative with the project KFC Smart Menu. Alongside the launch of three new products, the campaign comes with a new component – the platform Smart Jobs. Alin Sarbu – Art Director and Ioana Munteanu – Copywriter handled the project. The third place is taken by the campaign created by 23 Communication Ideas for JobZZ.ro – “Ai nevoie de angajati mai buni?” (Do you need better employees?), with Bogdan Naumovici – Art Director and Catalin Ciurlau – Copywriter.

Also in January, it receives an accolade The Fashion Experiment, a project signed by Geometry Global for Baneasa Shopping City that follows for 30 days the lives of two ordinary people, on their Instagram accounts, built in parallel. The idea became reality with the effort of Ioana Ichim (Digital Copywriter) and Bogdan Dinu (Digital Art Director).

In February’s ADC Top 3 the winner is Coca-Cola’s campaign SEEN, created by McCann Worldgroup Romania. The focus is on an online TVseries, inspired by the teenagers’ chats and for the best viewing experience, SEEN is accessed on the mobile, from the app WOAH. The creating team was formed of Miruna Macri – Senior Art Director, Mihai Vasile – Senior Copywriter and Sandra Bold – Head of Copywriter.

„Courageously built on insight, on target. An idea that takes over the channel- the mobile phone – and that can open the doors for a new type of content,” said about the campaign Laura Iane, ADC Ro member and Creative Director pastel.

The second place is taken by Inima Copiilor for the campaign Inimi Cusute (Sewed Hearts), created by the agency Mercury 360. Through the project #InimiCusute, The Inima Copiilor Association proposes itself to give back to the children the chance to a new life. Andreea Roscan – Art Director and Alexandra Jitarel – Copywriter formed the creative team.

The third place belongs again to McCann Worldgroup Romania,this time for the brand Toortitzi. Liftul (The elevator) shows an extra reason for which Toortitzi are so flattened and the team responsible for the idea was formed of Radu Rebei (Art Director) and Andrei Mihailescu (Copywriter).

–  Ursus and Kubis Interactive – Epic Delivery. With the help of Sector 7 Ursus illustrated what are the most common/ funny used excuses when we don’t want to go get beer. Fortunately, Ursus also found a solution for you to receive your beer at home. On the project worked Alina Radut – Senior Art Director and Ioana Enache – Senior Copywriter.

–  McCann Worldgroup Romania – Cea mai bună retea te sarbatoreste (The best network is celebrating you). Vodafone celebrates the speed and the performance by offering daily prizes to the users of the My Vodafone app. The team: Daniel Strugariu – Art Director and Ruxandra Papuc – Copywriter.