Up on the sky: more shooting stars than usual to be visible 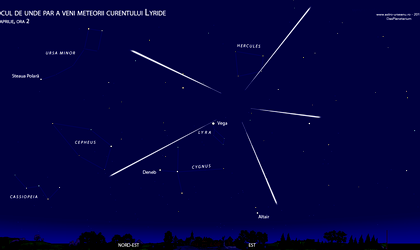 After the recent incredible beautiful moon we experiences the last weeks, now it’s shooting stars time. Admiral Vasile Urseanu Astronomical Observatory of Bucharest has announced that on Tuesday and Wednesday nights those who look up to the skies will be able to see more shooting stars than normally.

“On the nights of April 21/22 and 22/23, all those who look up to the skies will see more shooting stars than normally. The Lyrid meteor shower is ongoing, and on those nights it will reach its maximum. Our planet passes through an area where comet C/1861 G1 (Thatcher) passed, and the dust in its tail will burn in the atmosphere. This meteor shower is one of the oldest observed, with its first observation by the Chinese 2,600 years ago, in the year 687 BC. To see meteors you do not need astronomical instruments. You only have to look up to the skies, sit comfortably, for at least an hour, sometime between midnight and sunrise. You do not have to look a certain direction, because meteors can appear in any direction,” explains a Facebook post on the official page of the observatory.

You can catch the show starting at 10 p.m., but this shower’s perfect for early risers, as the hour or two before dawn is probably the best time to spot the “shooting stars,” mentions Cnet publication. Same source underlines also that the Lyrids aren’t necessarily the most spectacular meteor shower of the year, but they do come after an entire season without any major showers between January and April. So it’s a great opportunity to get outside and just spend some time looking up, especially with most of us spending lots of time indoors during these unprecedented times.