Three Romanian presidents on the same stage: 10 years with NATO 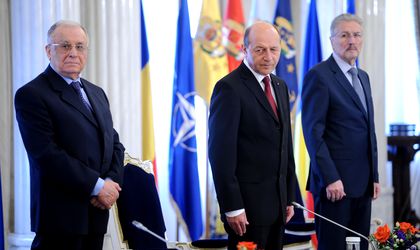 A special ceremony was held on Monday at the Cotroceni Palace, in order to mark the occasion of the 10th Anniversary of Romania’s NATO membership.  On March 29, 2004, Romania submitted all the necessary instruments for becoming a member of NATO, and on April 2 that same year, the country’s flag decorated the NATO headquarters in Brussels for the first time.

The anniversary ceremony was held in the presence of three of Romania’s presidents: the current chief-of-state and former country leaders Ion Iliescu and Emil Constantinescu. Tens of other representatives from the Military, Bucharest diplomatic corps, Polcie, Romanian Service of Information and other law-keeping institutions were also in attendance.

Traian Basescu said that, in the 10 years that have passed since entering the North-Atlantic Treaty, Romania has attained a level of security which has no equal in its history.

Former president Ion Iliescu commented that even before the 1989 Revolution, entering NATO was already an objective, seeing as integrating the country was “a fundamental idea in the Revolutionary program, removing Romania from isolation and embracing the Euro-Atlantic alliance was part of the strategy to obtain this for all the political players, despite their differences”.

Former president Emil Constantinescu said that “obtaining NATO membership was possible through the exceptional solidarity of everybody in the political and civil spheres, and especially through the contribution of everyday people”.

“I think that is something that we have lost, now when we need a new project for Romania’s future. I think recovering that solidarity is the most important thing”, Constantinescu recommended.