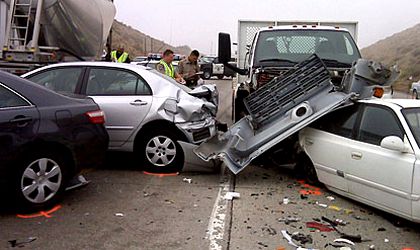 Five people were killed and 30 were injured at a 40 car pile-up in northern Greece on Sunday, according to the latest toll announced by Greek authorities, quoted by Global Post. The accident was triggered by a 39-year old Romanian truck driver, who has been placed under arrest.

According to initial report, the truck with Bulgarian license plates slammed into more than 30 cars who were pulled over for repairs, writes Novinite. Initially, the driver told Fire Brigade officers who rushed to evacuate passengers from vehicles that there were no efficient warning signs. In his first testimony to police he acknowledged that he had seen workmen waving flags and signs, but the truck’s brakes failed. The Romanian driver was assisted by an envoy from the Romanian Consulate in Thessaloniki

The road works supervisor has also been arrested and both men will be brought before a prosecutor on Monday.

Local police said that the people pulled out dead from the site were two Greek women, aged 53, a 42-year-old man and a Bulgarian national. One man’s body was retrieved charred out of a burned out car. At least two vehicles were totally destroyed by fire. The fifth victim succumbed to his injuries a few hours later during a surgery at a nearby hospital.

Both the Romanian Foreign Ministry and president Traian Basescu expressed their condolences on Sunday for the families of the people that lost their lives in the accident.

Macedonia-Thrace Minister Giorgos Orfanos who visited the site and injured who are hospitalized in local clinics said that all people responsible for the tragedy will face justice.