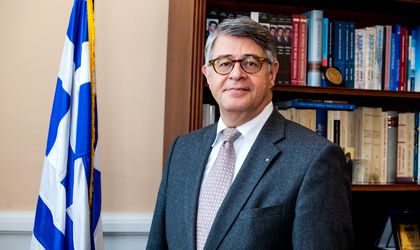 Ambassador of Greece to Romania Grigorios Vassiloconstandakis says the country is on the right path in its anti-corruption efforts, pointing to Romania’s progress in prosecuting public officials in the last year. His compatriots have invested over EUR 4 billion here and their development plans have continued despite the difficult economic situation in the Euro zone. The ambassador reiterated Greece’s support for Romania’s Schengen bid, adding as the country is technically ready for the move.

How are Greece and Romania collaborating in the economic field? What are the strong points and which areas still need improvement?

Greece and Romania have very strong relations in all domains of economic collaboration. This is due to historical reasons, cultural ties and geographical opportunity, and I must say that these bilateral economic relations are mainly characterized by a strong Greek business and investment presence in Romania. The investment capital of Greek origin currently makes Greece the sixth biggest foreign investor. Total Greek investments have far exceeded EUR 4 billion, and I must stress that these investments are qualitative, reflecting the long-term Greek business presence in Romania.

Greek businesspeople have been coming here since the beginning of the 90s, their investments showing their trust in the potential of the Romanian economy. I believe that this is rightly appreciated, since all Greek firms have contributed to the modernization of the Romanian economy, and its gradual adaptation to the EU economic environment.

Trade advanced significantly in 2013 both from the point of view of Greek exports to Romania and Romanian imports to Greece. I believe there is room for a further increase in bilateral trade as well as in Romanian investments in Greece.

How has Greece’s assumption of the EU rotating presidency influenced its political and economic relations with Romania and what are Greece’s priorities for the EU presidency?

Greece has assumed the presidency at a time when Europe is going through an extremely delicate phase. We have had the crisis over the last few years, which resulted in recession and unemployment, shaken the confidence of high numbers of European citizens in EU institutions and gravely affected social cohesion.

Our challenge is to ensure prosperity and stability, because it is more and more obvious that the priority areas of our presidency cannot escape the pressing needs of European citizens today. In a few words: the promotion of policies and actions to achieve growth, combat unemployment, promote economic and social cohesion and structural reforms, deepening integration and completion of the European monetary union, as well as addressing external challenges, including EU enlargement, have formulated the priority framework of the Hellenic presidency.

Does Greece support Romania’s Schengen accession and do you think that something will happen this year given the unfolding crisis in Ukraine, which has latterly absorbed the attention of the EU’s top brass?

It is well known that Greece supports Romania’s accession to the Schengen area because we think that Romania fulfills all the technical criteria; it complies with the acquis communautaire (e.n. European Community laws) in this field. We are doing our best, now that we have the EU presidency this semester, to promote Romania’s candidacy for the Schengen area. As you know, of course, this is not totally dependent on us, because accession into the Schengen area is a complicated procedure and the role of the rotating presidency is different, so Romania’s accession will come down to a synthesis of different options, positions, views and trying to find, when conditions are right, the common denominator in order to reach consensus. You know very well that unanimity is needed for this kind of decision, and we hope that consensus can be reached soon.

Would you advise Romania to join the Euro zone, given the economic hardship suffered by Greece in recent years? Prime Minister Victor Ponta recently said that Romania should adopt the euro in 2019.

What we must say from the beginning is that Greece joined the Euro zone some 12 years ago, when nobody could predict the architecture, procedures, outcome and the possibility of the euro positively impacting the economies of the Euro zone.

I think that following the crisis that started three-four years ago, all Europeans are aware of the problems related to the architecture of the euro as a common currency. And I think that over the last few years all of us have tried – the victims and those who profited from the euro – to find a new basis for this architecture so that the euro will never deal with the same difficulties we have gone through in the last few years.

I understand that your prime minister has predicted that Romania could join the Euro zone at the end of the decade. The current problems of the euro would most likely be solved by then, and Romania, with its very good economic indicators, will be in a strong position to adopt the euro.

Do you think that the EU as a political entity has emerged stronger from the recession? Is it still a relevant global political actor if we look at its response to the tensions in Ukraine?

The first big advantage of being a member of the EU is that all members define Europe as a common place to be – as a family, as a great area of activities (economic, political and cultural) and this is an invaluable asset for all Europeans.

Of course problems and challenges frequently arise and the EU has to be ready to deal with them, taking into consideration its weight, not only economically, but also politically and diplomatically.

It is true that we are trying to move in that direction and these are the efforts made by the common institutions we all respect. That is the European Parliament; first of all, the European Commission, the Council, and I think that over the years this is the goal to which we are getting closer and closer.

But you are right and I think that the crisis like the one in our region, in Ukraine, indicates the need for coordination, and through dialogue and unanimity we have decided on a common response approved by all member states.

To what extent have Greece’s economic woes impacted the investments of Greek companies in Romania? Have they been deterred from coming here?

On the contrary. The figures we have indicate that after an initial slight decrease in investments in Romania, Greek businesses have now not only stabilized but increased their presence here, and I believe that in 2013 alone around 700 new Greek companies invested in Romania. Not only this, but those present in Romania as of the previous year decided to invest more funds, especially the biggest ones, which invested more than EUR 140 million in the last quarter of 2013, making up close to half of all (e.n. foreign) investments carried out during this period. That’s not to mention the IT sector or naval construction – some Greek shipowners have undertaken (e.n. investments) in Constanta’s shipyards.

The dynamism of Greek entrepreneurs is evident in Romania and has not decreased following the crisis, and that also shows the trust we have in Romania’s capacity to absorb all this capital to the benefit of all sides.

What issues are raised by Greek investors doing business in Romania, especially regarding the fiscal and legal framework?

Greek investors consider the business environment in Romania a safe one. However we would like to see more stability and predictability in the legislative framework that applies to different domains of business and investment activity, especially regarding fiscal provisions and tax levels, as well as the incentives provided for investments in various economic fields. As an example, I could mention the changes in the renewable energy legislation and the insolvency law, but in general I understand that the biggest asset that Romania presents for foreign investments is the stability and security of the business environment.

We’ve seen more public officials jailed. Do you think that this is a genuine crackdown on corruption in the public sector?

I think that Romania, like Greece, has taken big steps forward concerning the anti-corruption fight. We can see that and all of us appreciate these big steps, which have taken place over the last few years – over the last year to be more specific. We are confident that Romania is on the right path in this field.

April 2013-present Greek Ambassador to Romania
2012 promoted to Minister Plenipotentiary
2010-2012 deputy director of the directorate for the Arab World and the Middle East, MFA
November 1999-March 2000 posted to Pristina as head of the first Greek monitoring mission of the peace process in Kosovo
1989-1992 directorate of bilateral relations with Turkey and Cyprus, MFA

Graduated from the Faculty of Law at Athens University. Completed a seminar on civil-military cooperation and conflict resolution at Harvard University’s JFK School of Government