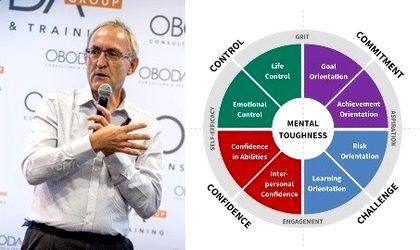 Well known British entrepreneur and researcher, Doug Strycharczyk who, together with Professor Peter Clough – renowned sports and occupational psychologist, have developed world’s famous, internationally recognized test MTQ Plus that assesses the level of “mental toughness” in athletes, managers and in in the field of education, comes to Bucharest for a certified training in Mental Toughness.

Doug Strycharczyk, CEO of AQR International, and Professor Peter Clough of the University of Huddersfield, Great Britain, have, for the first time in the history of psychology, operationalized the concept of Mental Toughness through the development of a Mental Toughness Assessment. Its latest version, MTQPlus, is a unique, valid and reliable psychometric measure, which assesses individual and group level of Mental Toughness. It is now one of the most widely used measures in the world of work, education, social settings and sports.

Doug Strycharczyk is now coming to Bucharest to run the first Mental Toughness Certification Programme in Romania, based around MTQPlus and updated concept of Mental Toughness.

Mental Toughness is a plastic personality trait.  Rooted in the notion of resilience, moves beyond this by adding ideas from the world of positive psychology. It is one of the most important attributes, on the basis of which an individual ability to perform and to succeed can be predicted.

“Mental Toughness describes the mindset a person adopts in what he does. It’s a personality trait that largely determines how people respond to challenges, stress and pressure, regardless of circumstances”, explains Doug Strycharczyk, founder of AQR International, UK, which works with research centers of major UK universities, and co-creator of the MTQ Plus test.

Unlike most psychometric tests that analyze either behaviors (how we act) or emotions (how we feel), Mental Toughness MTQ Plus tests analyze how we think, the main trigger of human actions and emotions.

“MTQ Plus is a normative psychometric test, this means, that test results for an individual are compared to test results for a relevant norm group which represents the population at large. It enables users to assess their scores before and after a training or development program has been undertaken. Testing evaluates the level of control over life situations and emotions, dedication to goals and expected successes, risk orientation and ability to learn from failures and confidence in existing skills, the possibility to develop new skills and to influence others”, adds researcher Doug Strycharczyk.

Doug Strycharczyk will come to Bucharest on February 20th and 21st, for a certified training session that addresses the human resources specialists and the general managers and middle management teams in the companies. The certified training starts with the evaluation of the Mental Toughness level of each delegate.