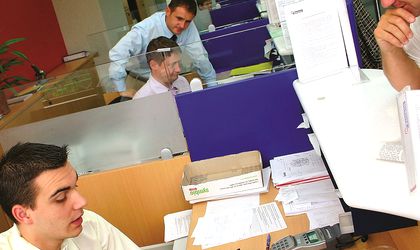 Since the crisis hit Romania all lenders have been trying to reshape their strategies in order to survive the current downturn unscathed. Many things have changed in the way that financial players tackle the market. Business Review surveys some examples of the paradigm shifts on the local banking scene that have taken place in the last few years.

Persuading as many customers as possible to take out a loan – for personal needs or a mortgage – was one of the main aims for almost all banks in 2008, when the first signs of the downturn became visible closer to home.

Lending was the most aggressive and dynamic segment of the market, while banks sought to increase their market share by extending their operations and developing their branch network nationwide. According to National Bank of Romania (BNR) data, in 2008 the pendulum on the local banking system swung dramatically: from a surplus to a deficit of liquidity and simultaneously from aggressive lending activity in the first three quarters of 2008 (+11.1percent in Q1, +8.2 percent in Q2 and +9 percent in Q3, compared with just 2 percent in Q4) to vigorous promotion to attract deposits in the last three months of the year.

And the market followed this trend in 2009 too, with lenders coming up with new offers to tempt customers to part with their cash. As for this year, interest rates for savers have been determined by the liquidity on the market and the monetary policy adopted by the BNR. Specialists expect interest rates for RON deposits to plunge in the months to come, probably to 5-6 percent, and then remain relatively constant until the end of the year.

Cost-cutting has been the most visible and practical measure banks took to adjust their strategies to the gloomy conditions last year. This has meant calling a halt to investments in opening new branches, with only a handful of lenders having had the courage to open some new units in 2009. However, extending nationwide was one of the main items on lenders’ agendas by 2008.

This is backed up by BNR data showing that from December 2005-September 2009, the number of territorial units of credit institutions in Romania almost doubled, going from 3,514 to 6,464.

But the need to increase operational efficiency has forced lenders to reduce their number of branches: from December 2008-September 2009 the number dropped by almost 100.

According to specialists, lenders will consolidate their financial position this year, with just a few financial institutions opening new branches.

After many years of intense expansion nationwide, lenders are now trying to find different ways to amass new customers. Launching new products and services that address specific targets seems to be the key feature in their strategies.

Pensioners, members of the liberal professions, children, teenagers, students and tenants associations are some of the available niches that lenders have set their sights on. A visible trend on the local banking market is segmentation, both for individual customers and corporate ones. Moreover, banks of all sizes have taken a similar approach.

The focus is now on launching products for specific categories of customer. BRD-Groupe Societe Generale, BCR, Raiffeisen, ING, Piraeus, OTP, Alpha Bank, CEC, UniCredit and Bancpost are among the lenders that have entered different niches in recent times. According to experts, specialization and segmentation are normal trends while the banking system is maturing.

But the reasons for entering such niches differ depending on the size of the institution.

Bianca Moraru Demeter, project manager at executive search company Professional, thinks that the key people in a company should be the focus, especially at present. In practice, companies have a great opportunity to find professionals from a wide range of segments.

“Companies should pay more attention to these people in order to retain them, which they often do. However, companies always consider the cost-benefit ratio,” says Demeter. She adds that there may be some cases when a firm fails to meet the expectations of its key people.

One banking professional cannot easily be replaced by another and, the Professional representative says, it is costly to replace staff because of the limited number of professionals in the field.

“Therefore, performance, achieving goals, the capacity to manage a bigger volume of work even with less money, assuming new and more complex responsibilities, avoiding mistakes and the ability to cope with a more stressful workplace are some of the skills that a lender values,” says the project manager.

While salary was everything before the crisis, things have chanced since last year. Demeter says that potential recruits now consider the stability both of the company and job, work environment, level of responsibility, goals that can be achieved and colleagues before they make the move.

The idea that a product or service is suited to any customer is no longer received wisdom. Switching from segmented to customized marketing – in banking, too – was a natural step when customers became more sophisticated. “We are living in a customer/consumer era,” says Roxana Marin, account manager at 2active PR. According to her, customized marketing differentiates the simple product and services providers from lenders that treat their customers or potential customers as equal partners.

“A customized approach means being close to the customer and can lead to long-term loyalty. The universe of customers remains almost the same, which is why lenders should use the same tactics to retain their current customers as they do to attract new ones, to ensure their profitability,” says Marin.

She adds that customizing involves extensive knowledge of the market and of the changes in consumer profiles.

“This also requires higher investments than niche communication, but it can bring superior benefits on the medium and long term compared with let’s say a promotional campaign for a bank product,” says Marin. Investments must be made in external communication and promotion and training for those who sell the product. But how will customized marketing give an impetus to local banking activity? “The financial industry began to apply customized marketing relatively late compared with other industries. But we have to recognize that the banking system was some way behind other domains such as telecom, FMCG and retail in terms of openness to new communication channels. And also, don’t forget that financial language is not very accessible or easy to shape into marketable messages,” says Marin. In her opinion, recent tailored financial educational programs and lenders’ approach to exploiting social media and Second Life, in addition to a fresh image for some lenders with a tradition on the market, will win consumers for th recently so-called ‘cold companies’.

“But it is important to be steady in the future, because a customized marketing initiative needs to pass the tests of efficiency and return on investment. Romanian customers will continue to be divided between several segments,” adds Marin. It is obvious that different products, messages and communication channels will be used.

“That’s why the importance of various demographics in the total number of customers is significant for any banking business. Which is why some – but not all – banks are investing in customizing their products or communication,” concludes Marin.