BR Analysis: Rising taxes without raising money: how Romania’s government increased fuel prices for all consumers but failed to collect extra money to the budget 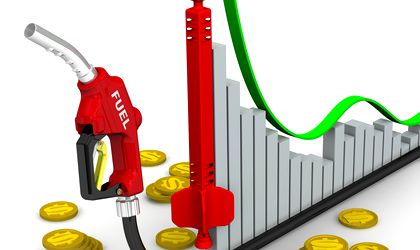 Gasoline and unleaded petrol prices rose by more than 20 percent during the last year in Romania, due to higher excises and global oil prices.

Excises on fuels went up by 20 percent in two stages, on September 15 and October 1, 2017, as the government desperately needs to increase revenue in order to cover larger expense.

“Excise tax on fuel has increased by 20 percent since September 2017, but excise tax revenue increases by only 3 percent in the first three months of this year,” economic analyst Iancu Guda noted in a recent comment.

But higher excises had a huge impact on retail prices. According to autotraveler.ru, during the last year, diesel prices rose by 28 percent (+RON 1.24 /liter), while super 95 petrol prices increased by 23 percent (+RON 1.05 /liter), a heavy burden on Romania’s drivers.

The first reaction of the consumers was to lower consumption, official data show.

The retail sales, a key index of consumer market, rose by 3.4 percent year-on-year in March, the slowest pace since May 2015, due to a decline of fuel sales, according to a National Institute of Statistics (INS) report.

The slow pace of retail trade in March was due to a sharp decline of motor fuels sales, by 7.1 percent compared with March 2017.

In the first quarter, the retail trade growth rate slowed to 6.4 percent, from 6.9 percent in January-March 2017, while motor fuels sales declined by 0.5 percent year-on-year.

But experts say tax evasion and informal economy may have played a role.

“Tax authorities fail to capture economic growth at the potential, as tax revenues from VAT grow much slower than consumption. Thus, VAT revenues increased by 2 percent in the first quarter of this year, compared to the same period last year, while revenues in retail and wholesale increased by 8.8 percent. (…) This reflects an increase in tax evasion and the underground economy,” Iancu Guda points out.

But lower fuel consumption in Romania is also a consequence of price competition in Europe.

According to UNTRR, one of Romania’s largest transport union, the increase in excise duty on fuels has had the effect of migrating fuel supplies by Romanian road carriers running in Europe in other member states such as Hungary and Austria, countries where diesel prices are more attractive.

The union added that the decrease in fuel sales in Romania was also due to the migration of volumes supplied to carriers from other countries, who prefer now to buy fuels in Bulgaria and Hungary, where the fuel prices are lower.