RON 3.1 million paid to homeowners as compensation for 2018 flood damages 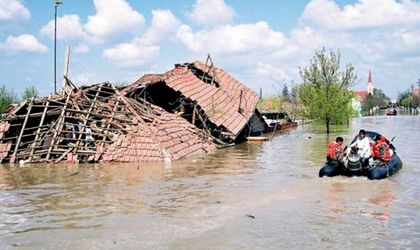 The mandatory housing insurance policies (PAID) are covering less than 20 percent of the houses in Romania. At the end of August, 1,683,514 mandatory housing insurance policies were in force, 2.01 percent more than in the same period last year. Out of these, 93.74 percent are associated with Type A houses and 6.26 percent of Type B dwellings. Also, 75.66 percent of the policies were concluded in urban areas and 24.34 percent in rural areas.

The most secure areas of the country remain Bucharest (38.50 percent) and Ilfov county (35.46 percent). After that, the most insured counties of Romania after the first eight months of the year are:

At the opposite pole, the least assured counties of the country are:

This summer’s floods have produced the most significant damage in recent years that can be compensated by the Natural Disaster Insurance Policy (PAID). On September 1, the total reserve for flood damage this summer was RON 3.063.178, for a total of 740 approved files.

According to statistics made by PAID Romania until the end of August, the most affected counties were:

The most affected cities:

Most cases were drawn up for flood-affected houses in rural areas (61 percent), followed by urban houses (35 percent). Houses in urban blocks account for 3 percent of the total flood affected, and 1 percent for rural ones.

“There is no need for a tragic disaster to recognize the benefits of a PAD policy. PAID Romania pays out, month after month, numerous files for each of the three risks provided by the PAD – earthquake, floods and landslides. There is a need for more serious awareness by the homeowners in Romania of the risks they are exposed to,” says Nicoleta Radu, general manager, PAID Romania.

The reinsurance program of PAID Romania

Since July 15, 2018, PAID Romania started renewing its reinsurance program, that reached EUR 901 million, with the possibility of extending to EUR 920 million.

PAID Romania has outsourced a risk of over EUR 900 million to international reinsurance companies with a minimum rating of “A-“. Thisway, the Government of our country was relieved of an important risk, which could turn into a vulnerability in the event of a major catastrophe.

According to company officials, the reinsurance capacity exceeds the level of protection for an event with a 200-year return (according to the Solvency II model and the RMS model).

PAID Romania only works with companies with an at least “A-” rating given by one of the rating agencies S & P or A.M.Best. Thus.

The company collaborates with the top 3 reinsurance brokers in the world, benefiting from their extensive expertise: Guy Carpenter, Willis Re and AON Benfield.