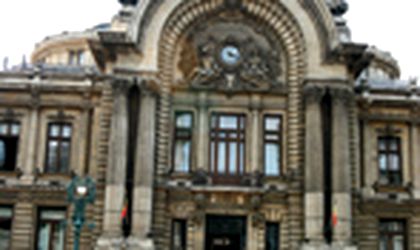 It was good and bad news for Alpha Bank last week. The good news was that the bank was the first to get its new crediting norms approved by the central bank. The bad news was that its head and veteran of 13 years Radu Gratian Ghetea left for CEC, replacing Eugen Radulescu. But the lender says the move will not result in major disruption.
“The bank's development plans for 2007 will not be affected by these changes,” said communications officer Elena Nita.
Meanwhile, Ghetea is expected to make his mark on CEC. He and current finance minister Varujan Vosganian will present the new strategy this week and pin-point the exact measures they will take in order to “increase the bank's efficiency,” as the minister asked. So far, things are looking up. At CEC, Ghetea said he found “surprisingly well-intentioned and well-qualified people.” He also found a last-generation IT system that the former management has implemented in about 1,000 of its 1,400 branches, plans to start up a financial group around CEC, a housing bank and a falling market share.
At the end of 2006, CEC dropped to ninth place in central bank rankings by assets, with a market share of 4.1 percent, down from 4.4 percent in 2005. Assets grew 6.5 percent in the first quarter of this year against December, reaching EUR 2.2 billion. CEC also put to use its extended branch network and increased its loan volume 60 percent compared to March 2006, reaching EUR 1 billion. Gross profits also went up 60 percent.
The downfall was at least partially caused by the endless privatization talks that eventually led to the state's decision to rebuff a bid from the National Bank of Greece, keep CEC under its management and give investors another go at it in a few years' time. By the time this decision was reached, CEC had put major investments on hold and growth on standby. Its privatization has been put off as well. Analysts have conflicting views on the fairness of Radulescu's removal from office.
“This change was not necessary,” said financial analyst and former finance minister Ilie Serbanescu. “It is just like in Romanian football: whenever we have a winning team, the coach is replaced,” he said.
Serbanescu said the former CEC head had managed to halt the bank's slide, bring in profits and also hold onto the bank's market position, therefore there were no good reasons to replace him. “In any case, there was not a business-related reason,” said Serbanescu. “When one fires people who make profits and starts talking about new projects, people get suspicious. There was no question about CEC's market share. Rather, the former management refused to pay their ‘dues.'”
Liviu Voinea of the Group of Applied Economics (GEA) said there is no saying whether the decision to dismiss Radulescu was justified or not. “It depends on CEC's objectives. If the objective was to privatize the bank, then the decision is reasonable. If the objective was maintaining CEC's market share – it is not. A clear evaluation is difficult to make: these objectives are stated in internal documents, which are confidential,” said Voinea. He added that the new management should keep CEC's competitive advantages. The bank should continue to tap into rural areas, small deponents and possibly SMEs, said Voinea. “The bank should also get involved in the financing of the agriculture sector,” he said.
Ghetea's mandate at CEC has started after 13 years of service at Alpha Bank, which ended on May 11 when his resignation was accepted by the Administration Council, said Nita.
“On May 14, Christos Giampanas was appointed head of the administration council. The reasons behind his appointment are his close connections with the Romanian financial-banking sector and his activity at Alpha Bank Romania,” said Nita. Giampanas served as executive president of the bank between 2004 and 2006.

Where to now?
“CEC will continue to be state-owned for at least one more year. If we decide to privatize it, we will choose a strategy that will give precedence to the national capital. There are already requests from local patronages in this regard,” said Vosganian. He added that as of now CEC will have to focus on financing the local business environment.
CEC should keep its edge on individual clients and SMEs, but not neglect the corporate segment, said Ghetea. Another one of the ideas now under Ghetea's scrutiny is for the bank to intermediate European Union funding for agriculture. Vosganian said this proposal was “excellent,” as it makes use of CEC's extended branch network.
He also referred to the exact reasons behind the change in administration two weeks ago when former CEC president Eugen Radulescu and two vice-presidents were swiftly replaced at the head of the National Savings Bank. “Radulescu did a good job and set up an IT system. However, right now, CEC needs to increase its power and we believe Radu Gratian Ghetea, who is also the president of the Romanian Banks' Association, has the knowledge and ability to accomplish this,” said Vosganian. “I have nothing bad to say about Radulescu. We merely replaced a good management with a better one. I trust that the new manager will turn CEC into a successful bank and boost its market share and prestige.” He added that the new president would be free to propose two new vice-presidents. Ghetea said he would do so when he knew the exact details of the new strategy for CEC, which will allow him to pick the best people for the job.
Radulescu said the administration had acted in an “unprecedented” way by moving against its own management. “A private shareholder would never have acted this way,” he said.