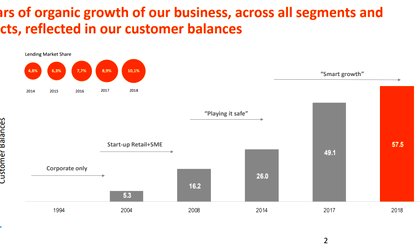 ING Bank Romania celebrates 25 years of presence on Romanian market, period in which it grew from a team of 5 people and a computer with no network connection to a market share of 10.1 percent and 1.5 million customers.

“In 2018 we recorded the highest growth so far in Romania. Over the past 25 years, with constant organic growth, we managed to cover a two-figure credit market share of 10.1 percent. We have increased the number of active customers in the retail segment by 13 percent and we have improved our digital presence by reaching a new record of 112 million authentications in Home’Bank,” said Michal Szczurek, CEO of ING Bank Romania.

Gross profit was RON 781 million lei, 34 percent more than in 2017, in the context of a strong portfolio development, customer growth and transactions processed through ING accounts. Significant organic growth led to a 27 percent increase in revenue over last year, rising to RON 1.82 billion in 2018, as a result of increased volumes in transaction.

Operational costs increased by 15 percent to RON 864 million, largely due to personnel costs, relocation to the new headquarters and digitization investments. IT, infrastructure and operational investments have allowed the electronic services to operate in normal parameters. Thus, in December 2018, ING reported 100 percent availability for card payments, 99.96 percent for the ING Business Internet Banking platform, while the impact of HomeBank’s unavailability affected only 0.07 percent of the platform’s users.

Risk costs increased by 80 percent compared to 2017, following changes in the credit risk calculation mode (impact of RON 175 million), while the non-performing loans ratio decreased to 3.2 percent, compared to 3.3 percent in 2017.

The balance of credits extended to customers increased by RON 4.42 billion in 2018, to RON 25.6 billion at the end of 2018 (21 percent increase). The growth came from both the lending activity of individuals and legal entities. Market share on the credit side increased by 1.2 percentage points in 2018, reaching 10.1 percent at the end of the year.

The distribution of lending remains balanced between the segment of companies (43 percent) and that of individuals (57 percent). The balance of credits to small and medium-sized enterprises increased by 20 percent compared to last year, supported by intensified customer consultancy and simplified financing for medium-sized companies, as well as the launch of the new financing solution – especially for micro-enterprises. As part of the lending segment for individuals, the personal credit available online from 2017, extended and with refinancing option, received good feedback from ING customers. In 2018, 2 out of 10 personal needs loans were granted in Romania by ING.

Market share for deposits stood at 9 percent versus 8.4 percent at the end of 2017, supported by both retail and corporate growth. The value of deposits grew by RON 4.3 billion, 18 percent more than 12 months ago, to RON 31.1 billion.

ING Home’Bank also recorded 112 million visits last year, while only 1.5 million visits were in branches. 76 percent of ING Home’Bank’s hits come from a smartphone. The personal need credit available online was no exception, the contract being signed electronically from mobile in 80 percent of cases.