Chimcomplex has concluded financing contracts of EUR 56.7 million with CEC Bank and Alpha Bank for the full refinancing of existing loans 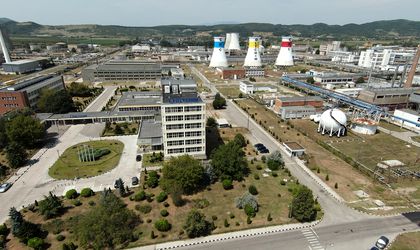 The company is considering starting investment projects with an effect in reducing the carbon footprint and increasing energy efficiency: the construction of a high-efficiency cogeneration capacity for gas and hydrogen (installed power of 55 MWe 4 turbines); the completion of the new polyol production line that will allow the doubling of current volumes and the modernization of the electrolysis plants that will strengthen the company’s position as a national leader in the production of hydrogen from water. At the same time, the emphasis is on digitalization and the start of green chemistry projects through which a new segment with sustainable products will open in the company’s portfolio. Chimcomplex is also considering accessing other financing on the international market for investment development.

After taking over Oltchim’s assets in 2018, Chimcomplex SA Borzești became the largest producer of chemicals in Romania and has continued a process of transformation and sustained development.

“The completion of the refinancing is a significant step for Chimcomplex and marks a new era for the company. It’s the culmination of meticulous and focused efforts over the past two and a half years to reshape the company. I thank the partners Credit Suisse Zurich and VTB Frankfurt for joining us in 2018, in a special loan transaction of 164 million euros, for the acquisition of Oltchim. I also thank the representatives of CEC Bank and Alpha Bank for their professionalism and availability to support a Romanian company. I thank Deloitte, Reff and Associates, as well as Lazarovici & Associates for being there for us.“, said Ștefan Vuza, Chairman of Chimcomplex.

The financing granted by CEC Bank includes a term loan facility in the amount of 20 million EURO and a revolving credit facility of 6.7 million EURO, which will reach the maximum ceiling of EUR 40 million.

As for the 30 million EURO financing obtained by Chimcomplex SA Borzești from Alpha Bank Romania, it consists of a term loan facility.

The advisors for Chimcomplex SA Borzești in attracting this funding were Deloitte Romania’s experts in the Financial Advisory practice.

“After the transaction in 2018, of financing the Oltchim acquisition, we are honored to have been again with Ștefan Vuza and Chimcomplex in another reference project. I congratulate our multidisciplinary team of financial advisors and lawyers, who have worked intensively and dedicatedly to structure this competitive process of selecting financiers, throughout a project that lasted seven months,” said George Mucibabici, Chairman of Deloitte Romania, who coordinated Deloitte’s involvement in this transaction.

Legal assistance for negotiation and signature of the financing documentation was provided by the lawyers of Reff & Associates | Deloitte Legal and Lazarovici & Associates.

“We are glad that we were again with one of the largest companies owned by a Romanian entrepreneur, in a large-scale financing. It is a confirmation of the recognition enjoyed by our expertise in the field of bank financing and a validation of our focus in accompanying companies with Romanian capital in complex transactions, which require both knowledge of local legal aspects and international best practices in the field. Thank you to Chimcomplex for your trust and good luck in the future!“, said Andrei Burz-Pînzaru, Partner Reff & Associates | Deloitte Legal.