BR Analysis. Mining Bitcoin in Romania? Watch the electricity bill. You might be “bleeding” money 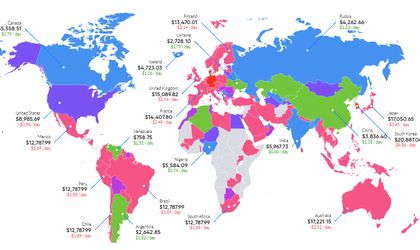 Mining for one bitcoin in Romania might see you end up in the red due to the high price of electricity for households.

Electricity consumption is one of the significant costs of bitcoin mining and increasingly powerful hardware is needed in order to remain competitive. In 2009, you could mine competitively with your desktop computer, but now you might have to pay around USD 1,000 just do get an efficient mining rig before starting to think about the electricity bill, according to Wired.

Looking solely at daily profitability from mining bitcoin, Romania stands to lose.  At a price of USD 0.120 per kW/h, the daily income would be a negative USD 0.96, according to statistics published by coinrate.com.

The cost for mining one bitcoin stands at USD 10,230 in Romania, while the market price of one bitcoin is close to USD 7,600.

Again, this takes into account the price paid for miners that don’t get lower prices for electricity, like the industrial sector.

Looking in the region, Hungary is a little bit more competitive in terms of electricity pricing, with the costs for one bitcoin reaching USD 9,746. In Bulgaria, it costs USD 8,280 to mine one bitcoin. In Serbia, you can get a daily income of USD 0.64 from mining bitcoin. The overall cost for mining one BTC stands at USD 5,865.

Strictly from a cost perspective, Venezuela is currently the most competitive market to mine bitcoin as it costs USD 760.29 to mine one. The country even came up with its own cryptocurrency, petro – which represents a barrel of crude, to save itself from the economic crisis.

China is still profitable to mine bitcoin, but the government announced plans to stop these operations in the country. Canada is another country where you can get a daily income of USD 0.76 for mining bitcoin, with total costs of USD 5,541.

The calculations are based on an assumption of a 0.4527678 percent daily increase in network hash rate. This shows how much computing power is used at network by users across the world.

In April 2018, Morgan Stanley equity analyst Charlie Chan stated that mining Bitcoin is not profitable when its price is below USD 8,600.

“We estimated the break-even point for big mining pools should be USD 8,600, even if we assume a very low electricity cost (USD 0.03 kW/h),” said the analyst, according to CNBC.

In the United States, it costs USD 8,957 to mine one bitcoin, with the daily income being a negative USD 0.50.

Back to Romania, the former minister of energy Razvan Nicolescu said recently that the state should analyze the impact of cryptomining operations on the country’s energy consumption.