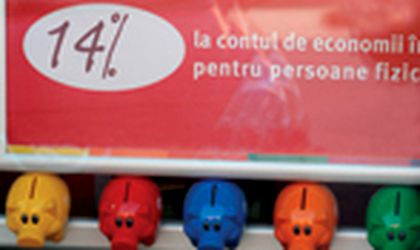 At the beginning of this month, the local subsidiary of the Greek financial group Alpha Bank announced a 15 percent interest rate for deposits in RON with a three-month maturity. Quite a catch in the current economic climate when companies, as well as individuals, are carefully monitoring every dime spent and looking for safe ways to increase their income.
Alpha Bank isn't the only financial institution with operations on the local market to have raised its interest rates.
Banca Comerciala Romana (BCR) also said it would up the interest on deposits in the Romanian currency with a two-month maturity to 14.5 percent, while Royal Bank of Scotland (RBS) is offering 13.25 percent interest on RON deposits with a three-month maturity. Similarly, Credit Europe Bank is offering 14 percent interest on deposits made by small and medium companies in RON.
Market commentators say that banks are willing to negotiate even higher interest rates for deposits, if, of course, the sum to be entrusted to them is high enough. But how long will customers be able to benefit from these attractive interest rates and what is driving banks in the race to attract individual and company savings?

Banks relying on shareholder financing turn eyes to deposits
“The banks that in the past few years have focused mostly on loans and have neglected savings have become dependent on getting their capital from shareholders or the financial markets. These banks are under a lot of pressure, as these sources are much harder to access now,” Omer Tetik, vice-president of individual banking at Credit Europe Bank, told Business Review.
Other financial specialists say that in the past few months, the interest rate for RON deposits has increased so much because of the exchange rate volatility and the liquidity crisis.
“The interest rate always follows market trends. As the cost of drawing liquidities has increased outside Romania, we can see that on the local market there is a difference between the current interest rates and the ones at the beginning of last year. As has happened on mature markets, local banks are focusing more on savings and on a careful investment policy as well,” Haris Hanif, head of retail and consumer banking at RBS, told BR.
According to him, the current rising interest rates for deposits are linked to banks' strategies. “Every bank should maintain a balance between the financing costs of capital drawn from banking sources and from the retail market. This balance has been affected by the financial crisis and now banks are trying to re-establish the equilibrium, by offering attractive interest for savings products,” said Hanif.

Interest rates on savings cannot go up for ever
Bank specialists say that this policy won't work on the long term, because the interest rates are being increased artificially.
“I believe that banks could start to decrease interest rates for deposits in the coming months, and the first signal would be that banks offer lower interest rates for long-term deposits. A high interest rate for deposits will have repercussions in the real economy on the medium term, as lending and production costs would increase,” Melania Hancila, head of the research and strategy department at Volksbank Romania, told BR.
Financial specialists emphasize the BNR's role in tempering this race. In the second half of 2007, the bank successively increased the reference interest rate level, trying to stave off a severe depreciation of the RON, maintain a comfortable level of the real rate and encourage savers to keep their money in RON.
“Despite the fact that the BNR has recently decreased the reference interest rate by 0.25 percent, this measure probably won't have any influence on the market and nor will we see a drop in the interest rate for deposits. Cutting the reference interest rate further would exert significant pressure on the exchange rate and liquidity in RON would increase,” Andreea Gheorghe, chief analyst with Intercapital Invest, told BR.
The RBS representative believes that the end of the international financial crisis would help to resolve the local issue as well.
“If the global economy stabilizes, we'll see interest for deposits at the same level as it was a few months ago. The interest level will not increase much more as banks will choose the cheapest financing in order not to put pressure on loans. The market will decide the intensity and the duration of these fluctuations,” said Hanif.

Banks turn to government and bnr to ease their liquidity pain
Bank specialists are hoping that government and BNR intervention will change the economic climate and are calling for immediate measures.
“We expect the authorities to implement efficient measures to increase banks' financial resources, so as to decrease the minimum mandatory reserves and the interest rate for monetary policy, which will ease the lending process, meaning lower interest rates for loans,” said Hancila.
Rozalia Pal, chief economist at UniCredit Tiriac Bank, is looking to the BNR for measures. “This year, we expect the BNR to cut the reference interest rate by 1.75 percent to 8.5 percent and improve the liquidity on the inter-banking market,” said Pal.
She added: “From the government we expect clear and realistic measures to decrease the current account deficit and to guarantee foreign financing, which is necessary to cover the deficit gap in the event of continuing falls in FDI. Also, it is important to focus on public investments like infrastructure and European funds. The government has an important role in improving the country risk, with a significant impact on the economy's financing costs.”
Meanwhile, banks need to manage the situation on their own, and time will tell which of them increase their market share for saving products.