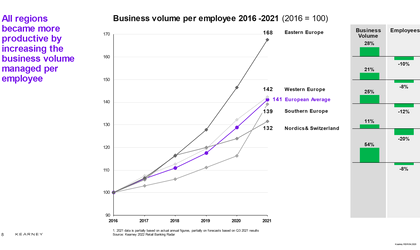 As banks reported their second-highest profits in 15 years, average profit per customer across Europe rose 43%, from €150 in 2020 to €214 in 2021. Meanwhile, risk costs as a percentage of income fell in every country, to the lowest level recorded in Kearney’s Retail Banking Radar series.

Leveraging survey and proprietary data from 89 banks in 21 countries across Europe, the research revealed that despite the strong rise in business activity, such as an increase in savings and borrowing by households and small businesses, retail banking revenues for Western Europe were broadly flat compared to the last ten years. This suggests that banks have had to run at pace just to stand still.

However, a reduction of 12% in headcount and 25% in physical bank branches over the past 5 years, in combination with an increase of 25% in business volumes, allowed all regions to increase productivity. Whilst these obvious reductions were facilitated by changing customer behavior in the last decade, the report also warns that finding such ways to decrease costs, even by 1-2% per annum, will be increasingly difficult for retail banks now that sizable reductions have been completed. 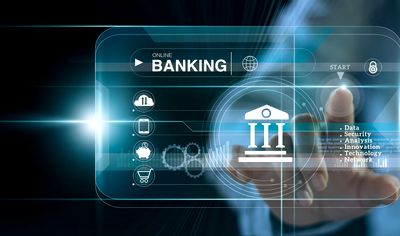 Rate increases from the Bank of England and European Central Bank could provide a boost to bank revenues in 2022, as Europe departs from the zero-interest-rate policy after more than a decade.

However, the economic uncertainty and rising inflation do pose a threat. The report concludes that it is imperative for retail banks to remain vigilant on how the rising cost of living impacts loan impairments as well as demand for consumer banking products. There will be tough choices for retail banks to make in 2022 and mounting pressure to act on their operating models.

Roberto Freddi, Partner at Kearney, comments: “After a tumultuous few years for the European banking sector, it is positive to see such a strong recovery in 2021, with profits nearing record highs compared to our previous Retail Banking Radar and costs falling across the board, even if profitability was influenced mainly by the reduction of risk provisions.”

Sameer Pethe, Partner at Kearney, comments: “In a time of significant investment into digitisation, new compliance costs and growing wage inflation, cost savings through headcount and branch reduction have proved convenient, but there is likely very limited room to reduce these costs further. Instead, banks must continue on the path of digitisation, fundamentally revamping their business models to become digital-first, if they want to see further improvement in their cost performance in coming years.

Daniela Chikova, Partner at Kearney, adds: “Last year in May, banks were faced with 30% decline in profitability and expectations about 2021 were subdued. And yet, the industry rebounded to one of its best years on record – showing resilience and strength. Rising inflation and the end of the decade-long central rate stasis will create new challenges in 2022. Retail banks needs to stay alert, act quickly and relentlessly focus on, productivity and efficiency.”