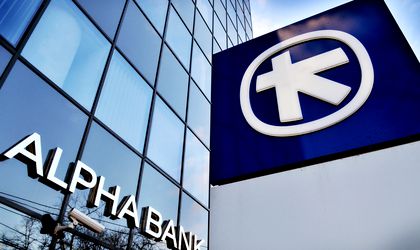 Amid a challenging macroeconomic context characterised by a high level of uncertainty, Alpha Bank Romania continued to strengthen its position on the market, increasing its assets by 11% compared to the same period of the previous year, with a sound financial and commercial performance:

Amid a challenging international context with high geopolitical risks, growing uncertainties surrounding the implications of the energy crisis and the rising inflationary pressures, the local macroeconomic environment shows signs of a potentially slowing outlook, in line with trends observed globally.

However, despite the new challenges, Alpha Bank Romania remains fully committed to fulfilling its role as a liquidity provider to the economy.

During the first half of the year, Alpha Bank Romania has continued its efforts to support the business ecosystem, actively participating in all the programs run by the Romanian Government aimed at private sector development. Moreover, Alpha Bank Romania was designated by the Ministry of Entrepreneurship and Tourism as a “partner bank” within the “National Programs Stimulating the Establishment and Development of SMEs“.

During the first half of the year, the Bank has had a sound commercial activity, with financing of large corporates growing by 10% and new loans granted to SMEs marking an annual increase of 56%. Additionally, the housing loan segment continues to grow, with new originations recording an increase of 16% compared to the same period of the previous year.

Alpha Bank Romania remains a top player in the area of payment solutions for merchants, with the turnover of merchants through the Bank’s systems reaching a historical level, up by 35% compared to the same period of the previous year.

In line with its strategic values and priorities, the Bank continued to actively support the transition of Customers to the Digital Era. Thus, during the first half of the year, a series of facilities were implemented for holders of cards issued by Alpha Bank Romania, allowing an increased level of flexibility, and providing for a superior digital experience. Furthermore, network coverage of multifunctional ATM 24/7 Banking machines was extended to almost 90% of units (compared to 50% coverage at the end of June 2021), thus improving Customer access to services, by implementing self-service technologies.

The Bank’s solid profile, with an elevated level of capitalization, improved quality of loan portfolio, high liquidity and a robust growth in deposits, has also been recognized by the international rating agency Moody’s Investors Service, which upgraded the long-term deposit rating of Alpha Bank Romania, from “Ba2” to “Ba1”, as well as the rating for Baseline Credit Assessment (BCA), from “b1” to “ba3”. The outlook on the long-term deposit has changed from positive to stable. Furthermore, the outstanding quality of the mortgage portfolio has led to the rating improvement of the covered bonds issued by Alpha Bank Romania, from “A3” to “A2”, one of the highest ratings issued by Moody’s on the Romanian market.

The Bank’s contribution in sustainable financing and the support it provided for the transition to a green economy has been recognized by the European Bank for Reconstruction and Development (EBRD), which granted Alpha Bank Romania the award ”Deal of the Year – Green Trade” within TFP – the Trade Facilitation Program.

At the same time, Alpha Bank Romania supports culture and community involvement, acting as a partner of the Performing Arts Market and of the Volunteer Program at this year’s edition of the Sibiu International Theatre Festival (SITF). The Bank also supported the “Save the Children” organization partaking in the joint effort to take care of Ukrainian refugees.

Alpha Bank Romania is a member of Alpha Bank Group, one of the largest banking and financial groups in Greece, founded in 1879 by J.F. Costopoulos. The international activities of the Group are extended, in addition to Romania, to the United Kingdom, Luxemburg and Cyprus.