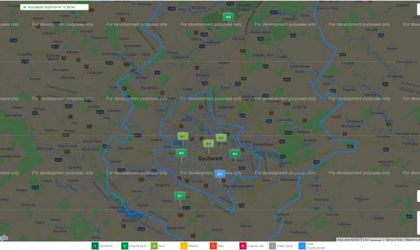 While everybody is trying to cope with the pandemics, The Ministry of the Environment announced on Facebook that in the last week, the concentrations of all pollutants monitored in Bucharest were well below the limit values, meaning that Bucharest breathes fresh air. On Monday, the PM10 concentration was close to the values of the stations located in the mountain peaks, according to the data provided by the ministry.

“Bucharest breathes today mountain air!”, The ministry said, in a message posted on the Facebook page on Monday.

“In the last week, the concentrations of all pollutants monitored were well below the limit values. Every day, there were periods of hourly growth of PM10 and NO2 particles, in the morning, from 09:00 to 11:00, respectively in the evening, from 20:00 to 22:00, but the amplitude of these increases was well below normal values”, explained the Ministry.

Bucharest breathes fresh air news comes after several places in Bucharest registered unbreathable air in the past weeks, where, at the beginning of the month, on the night of March 1 to 2 in the city capital, there was a record pollution, with over 900-1,000% exceeding the maximum limits allowed for pollution with PM2,5 (suspended particles smaller than 2.5 microns in diameter – from combustion, for example) and nearly 800% at PM10 pollution (suspended particles less than 10 microns in diameter – from dust or pollen).

Photo credit: The Ministry of the Environment