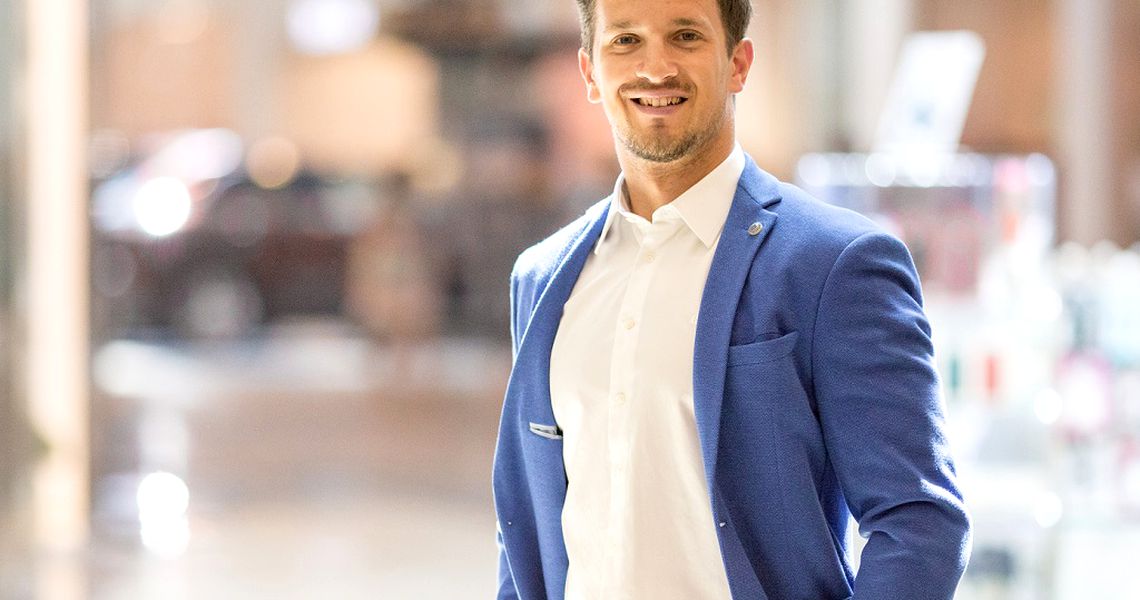 With more than 26 years of experience in sport, he trained as a gymnast, a field in which he won dozens of national and international medals. BR talked to Florin Neby, general manager of Neby Fitness, about the fitness club market, his road to entrepreneurship and his newly launched products.

At 19 years old, Florin decided to leave artistic gymnastics behind him and continued his career in the Aerobic Gymnastics National team, going on to become European and World champion and Emeritus Master of Sports in Romania. After ending his sporting career, he took part in several projects, such as serving as member of the Aeros group, whose show was compared to Cirque du Soleil’s, performing all around the world and appearing in major magazines and newspapers, including the New York Times.

When did you first feel you wanted to become an entrepreneur and why?

In 2012 I started to develop my personal brand – Florin Neby – and along with it to attract a community of people. Something that little by little made me realize there was a market for a Neby concept.

What qualities that you developed in your career as a multi-awarded sportsman have helped you along this journey?

When did you decide to launch Neby Fitness and why these particular two locations (Baneasa and now Domenii)?

Prior to launching Neby Fitness Baneasa I was a trainer in a network of clubs that was subsequently bought. In mid-2014 I decided the time had come for me to stop depending on the location / rules / logistics of others. So I started to look for that particular location that would define best what Neby Fitness wanted to transmit and, after nine months of searching, we found it. I’ve always chosen the location strategically. To be easily accessible, with visibility, in a bustling area, with parking spaces and a special interior architecture.

How has your business grown?

We had an organic approach. We have always been oriented towards the client, who is the most important to us. Moreover, we succeeded in keeping 80 percent of the team which gave us credibility in front of our clients and helped loyalize them.

What were the main challenges over the years and how did you surpass them?

We face challenges every year. One is the days off given by the state and announced at the last minute that interfere in any campaign you want to roll out, so, no matter how attractive it is, people’s interest during the free days is lower than usual.

Another challenge is that most people go to the gym in a seasonal rhythm. Any fitness club has a drop of 30 to 40 percent during the summer season. Still, we run awareness campaigns about the need to do sport a minimum of 10-11 months a year, and that helps.

How are you positioned on the market and what is your differentiator?

We always analyze and know how much time people allow for sport. The average time is 45 minutes for a training session. We know that time is really important for the people coming to our fitness clubs and therefore we try to make their time here as efficient as possible. Therefore, our services and activities are adapted around those 45 minutes. We function under the fitness express principal.

How do you choose new locations?

Depending on the concept that we want to implement in the club, the flow of people in that particular area and the club’s proximity to the target audience.

What are your main business goals for 2019?

We have developed a complementary business, an online shop of accessories and technology in fitness, together with our partners from LivingWell, in which we invested in the first round EUR 100,000. We also launched the platform fitmag.ro, which targets everyone passionate about movement and sports and the future fitness studios.

In 2018 we had a turnover of around EUR 650,000 with 11 percent profit, but also with the EUR 100,000 investment in modernizing the clubs, in the logistics and the equipment. In 2019 we aim to raise the profitability growth margin to at least 15 percent.

What are your most successful programs and why?

We have two very special programs that have priority. One is BecomeFit, which was the first training, adapted nutrition and coaching program in Romania, conceived in 2012 and launched at the beginning of 2013, and which has as its main purpose the body remodeling of those who take part in it. The program is composed of training, nutrition, coaching and motivation, but also long-term education through Q&A sessions. It is divided into groups with different intensity: Basic, UP, Advanced, Pro.

Moreover, the program has a corporate version called BecomeFit Corporate for companies that want to offer their employees a complete and complex seminars service, adapted nutrition and training at the company’s location. We believe that BecomeFit Corporate is the most efficient method of stimulating the employees to take part actively in steering the company in the right direction, supporting the development of a new community and providing stability at the workplace while raising work capacity through the employees’ wellbeing.

The second one is Neby Fitness Academy, a fitness school launched in 2018 which is receiving feedback way beyond our expectations, where we transform people passionate about fitness and movement into fitness trainers. With a diploma recognized nationally and internationally that allows them to practice further in this industry, it’s good to know that 90 percent of our graduates are now active in the best fitness centers and a small number of them are our collaborators as well.

What would you say are the main problems faced by businesspeople who come to the gym and why?

Most people coming to the gym don’t treat it as a priority, but more like an option or a fad. We’ve come a long way in the last few years, but we still have a long road in front of us. While stress is this century’s main problem, practicing sports is one of the few options that one has of anti-stress treatment without negative effects. Sport can solve a lot of problems, from bad posture to better daily health.

How would you characterize the market you are in?

Effervescent, but still chaotic. It definitely has huge potential for the next five years.