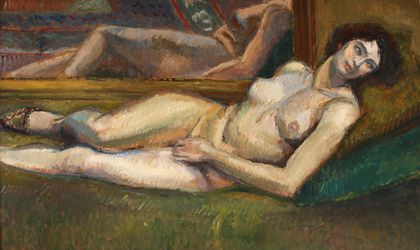 Bucharest has a wealth of museums and memorial houses, many hiding unique art treasures, such as private collections of works by Romanian artists, artefacts collected by Romania’s aristocratic families or well-curated  collections by foreign masters. Here are five of the best art museums in Bucharest you probably haven’t heard of.

The Museum of Art Collections, located on Calea Victoriei, Bucharest’s main artery, houses an eclectic collection of art, artefacts, furniture, glassware, carpets, Romanian glass painted icons and, perhaps an unlikely presence, a collection of Japanese stamps. The items o display, collected by some of Romania’s most well known Bucharest-based aristocratic families, were brought from abroad during the 18th and 19h centuries and later donated to the museum. Most come from Asia and the Middle East, but the collection also includes and several pieces by Western European art, such as a drawing by Dutch master Vincent Van Gogh. The unique collection of Romanian art, which includes works by Alexandru Ciucurencu and Nicolae Toniza, and Iosif Iser, among others,  is a must-see, as is the collection of glass icons.

A visit to this memorial house, whose interior decorations were dreamt up by lady of the house artist Cecilia Cutescu-Storck, will immerse you into the world of a family of artists that have left a mark on Bucharest’s artistic legacy. Expect paintings of seaside landscapes, giant frescoes of muses and forest creatures and lots of very expressive marble sculptures. And, if you look closely on one of the walls of the main room, you might even find the definition of love. Housed by one of the oldest houses in Bucharest, Casa Melik, a charming villa built two hundred of years ago, the Theodor Pallady Museum hosts not only the biggest collection of paintings and drawings by the Romanian painter, but also a fine selection of furniture and paintings. The visit starts as soon as you step in, as the walls of the ground floor are also covered in art, and continues as you walk through the upper floors. Take the time to stop for a moment on the upper floor and immerse yourself in the tranquility of the neighbourhood, while sitting on one of the benches or resting on a carpet, while you imagine how the may generations of inhabitants enjoyed the space. Located in one of he most upscale neighbourhoods of Bucharest, where mighty interwar villas recreate the charm of old Bucharest, the Zambaccian Museum is home to a fine collection of works by Romanian masters. The list includes Nicolae Grigorescu, still the best sold artist in Romania, Stefan Luchian, Ion Andreescu and Corneliu Baba, among others. Impressively, this museum has on display the only painting by French post-Impresionist artist Paul Cezanne. Another remarkable presence is that of Romanian sculptor Constantin Brancusi, whose work is on permanent display. One of the best but unknown museums in Bucharest, Cotroceni Museum is hosted by a historic building that is also the official residence of the President of Romania. The well-curated permanent collection includes, among works by Romanian artists, a valuable collection of old books and furniture. But the building itself, a former Royal Palace built in the 19th century, is more than worthy of a visit. Pay attention to the Hall of Honour, whose decorations are inspired by the French Opera Garnier, the Flowers Room, named the Golden Room in the times of Queen Marie, and the Great Hall of Receptions built in the Neo-Romanian style.