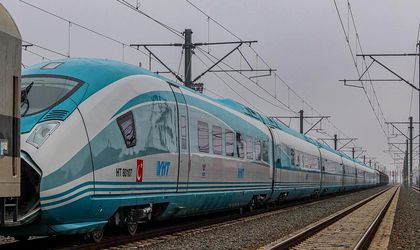 The Siemens Velaro high-speed train passed through Romania on December 1st, on its way to Turkey, where the State Railways (TCDD) has commissioned the Siemens flagship since 2013. According to hotnews.ro, the current contract for the 10 new high-speed trains is worth EUR 340 million and will increase Turkey’s current Velaro fleet to 16. Romanian train enthusiasts had the chance to see the Siemens electric multiple unit (EMU) being towed on the country’s outdated rail systems between Curtici and Giurgiu. Many were left wondering when or if they will see such technology operating in Romania.

Turkey has commissioned its first Siemens Velaro in 2013 and it started operating in 2015, commissioning another 16 trains since. One of the German produced trains was involved in the 2018 Ankara train collision, leaving the TCDD Velaro fleet to 16. Nonetheless, the train is very much appreciated in Turkey, where it reaches speeds of 250 km/h, making the 245 km long Ankara – Eșkișehir route in just 87 minutes and the 309 km long Ankara – Konya in 105 minutes. A third high-speed railway, the 406 km long Ankara – Sivas line, is projected to start operating in 2020.

Meanwhile, Romanian railway infrastructure ranks 26th out of 28 in the European Union, virtually last, because the countries in 27th and 28th have no railway system at all (Malta and Cyprus). The country’s railway company (CFR) has announced for 2019 an investment budget worth EUR 71.1 million, but little improvement can be noticed in the actual trains. The average speed of Romanian trains is only 50 km/h, not even half of the EU average. Only 8 lines can support speeds between 80 and 140 km/h: Bucureşti Nord – Constanţa (225 km), Bucureşti Nord – Predeal (140 km), Bucureşti Nord – Galaţi (241 km), Bucureşti Nord – Timişoara (562 km), Ploieşti – Vicşani (488 km), Iaşi – Paşcani (76 km), Episcopia Bihor – Halmeu (150 km) and Apahida – Baia Mare (181 km).

Previous Transport Ministers have constantly gone on record to say that new investments would take the average speed of Romanian passenger trains to 140 km/h, but this has yet to happen. The Romanian speed record was set in April 2019, when an electric train built by the Craiova based Softronic locomotive factory, reached speeds of 175 km/h in a test environment. The new train is planned to serve the Craiova-Bucuresti and Bucuresti-Constanta routes.

It is true that modernizing the whole Romanian railway system is a hard task, as the country has the seventh largest network in Europe, with no less than 20,000 km of rail, most of them old and thoroughly neglected for decades. No one is asking for an overnight restoration of the Romanian railways, but improvements have been barely noticeable in recent years, despite the millions of Euros allocated to the modernization of engines, cars or tracks.