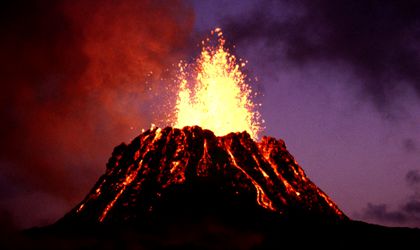 A whole town has been ordered to evacuate after the eruption of the Kilauea volcano on Hawaii’s Big Island caused lava to flow in residential areas, according to The Guardian.

All 1,500 inhabitants of Pahoa were told to leave after steam and lava poured out of a crack in the nearby Leilani Estates. Lava spurted into the sky from the road and aerial drone footage showed a line of lava snaking through a forest.

Resident Ikaika Marzo told the Honolulu Star-Advertiser that lava spread over an area of about 180 meters wide behind one house in Leilani Estates on Thursday. He said it sounded like a jet engine.

Residents had been warned for the last week that they should prepare to evacuate, with officials saying an eruption would give little warning. Nearby community centres were providing shelter.

Earlier in the week, a school in the Puna district was closed due to the ongoing seismic activity and several roads cracked under the strain.

Since Monday, hundreds of earthquakes – most of them about 2.0 magnitude – have been recorded in the area. The Puu Oo, which is a volcanic cone in the eastern rift zone of the Kīlauea volcano, began to collapse on Monday, triggering earthquakes and pushing the lava into newly created underground chambers.

Officials said it was impossible to predict how long the eruption would last.

Jeremiah Osuna, who captured drone footage of the lava stream, told the Honolulu television station KOHN that it sounded as if someone “put a bunch of rocks into a dryer”. He said he could smell the sulphur, along with the burning trees and other vegetation.

The US Geological Survey said fresh cracks in the ground were reported on Thursday afternoon and hot vapour and lava began to erupt.

The geologist Janet Babb said the magma crossed below Highway 130, which leads to a popular volcano access point, on Tuesday night. Hawaii County civil defense agency closed the area to visitors and ordered private tour companies to stop taking people into the region. Kilauea is one of the world’s most active volcanoes. It is located in the Hawaii Volcanoes National Park, which has closed off nearly 6,350 hectares (15,700 acres) due to “the possibility of a new eruption and unstable geologic activity”.