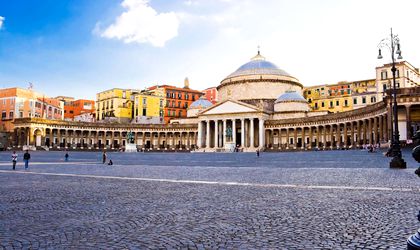 Summer is coming to an end, and while 65 percent of the Romanian tourists who have planned a beach holiday this year pack up their towels and bathing suits, the other 35 percent are considering the possibility of a city break before the next major holiday. Some may not like the fact that city breaks usually mean going to places that are packed with thousands of tourists, there are solutions.

While travelers often tend to travel to the most popular destinations, there are also different places you can visit that may be surprisingly beautiful and interesting. The free search engine momondo.ro has selected several European cities that are overlooked by tourists, but offer as many experiences as the biggest tourist magnets.

In addition, choosing these destinations can be up to 34 percent cheaper.

“Naturally, the most popular cities are also the most expensive, and the feeling that you pay more than you get along with the constant crowding among other tourists can be really uncomfortable,” says Mircea Giurca, momondo’s representative in Romania.

Sevilla and Naples instead of Barcelona and Rome

Instead of Rome, Berlin or Barcelona, tourists can choose Naples, Leipzig or Sevilla. In Naples, the famous Italian cuisine has its own local recipes, and you can have a similar experience as in Rome, plus the fact that you’ll be on the shores of the Mediterranean and near Mount Vesuvius. The German city of Leipzig offers a musical culture rivaling the one in Berlin, while in the sunny Sevilla the savings for a night on a double room in a 3-4 star hotel can reach up to 30 percent compared to Barcelona.

According to momondo.ro, Lisbon can be replace with Evora, a museum town on the UNESCO World Heritage List and a fascinating mix of old and new. For artistic experiences and a vibrant nightlife, in its own style, Bristol, a less-known English city can be visited instead of London.

Chania, Crete’s second largest city, can be replaced with the charming Rethymno on the same island. The Venetian, Ottoman and picturesque harbors remain as present in both cities, but Rethymno gains ground through the more relaxed streets and overall atmosphere.

Nantes or Trogir instead of Paris and Dubrovnik

A trip to Paris, Dubrovnik and Istanbul can be postponed in favor of cities like Nantes, the lively capital of Brittany. While a room at a 3-4 star hotel in Paris costs an average of EUR 114 , the price in Nantes is as low as EUR 78, saving up to 32 percent.

Trogir is another medieval town in Croatia and an alternative to popular Dubrovnik. Located on a small island near Split, Trogir is crossed by marble streets and hides a beautiful beachfront boulevard.

Finally, when it comes to Istanbul, a capital full of history, flavors and colors, the queues in front of its historical objectives can sometimes be overwhelming. Instead, the city of Izmir is Turkey’s third largest town, with a 5,000-year history and it is much less crowded and offers accommodation that is up to 11 percent cheaper.