A Brit’s Top 10 Best Things to Do in Romania 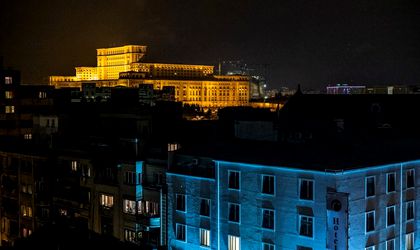 Andy Braddell is a British citizen with tremendous experience in travelling and travel writing. In his most recent adventure, a nine month tour of Eastern Europe, which he completed just as the pandemic context was taking hold of Europe, Andy visited Romania, Czech Republic, Slovakia, Hungary and Poland. As you can see from the enumeration, Romania is on top of the list, because, as Andy Braddell himself puts it, he “loved every part of that experience, and wanted to be a bit positive and share some of the experiences of traveling around Romania.”

Bran Castle is one of the most famous landmarks in Romania. Its aura of mystery makes it a must-visit destination for any traveler.

Bran Castle is located on top of a 200-foot cliff in Transylvania; Dracula is a fictitious character, written by an Irish writer who had never visited Romania. The infamous Vlad — also known as Vlad the Impaler, made Bran Castle his home. One of the world’s most famous castles, Bran Castle, is a museum dedicated to Queen Marie of Romania.

Romania is home to some pretty impressive castles — this is no secret! And Peles Castle, situated in central Romania, is one of our favorites.

As one of Romania’s most visited castles, Peles Castle has an incredible history, surroundings, and architecture. The history began when Prince Carol of Romania saw Sinaia; he was overwhelmed by its beauty and decided to get some land and ordered a castle to be built to be used as a summer residence for the Romanian royal family.

With 34,444 square feet, the castle has 160 lavishly decorated rooms with beautiful furniture and more than 30 bathrooms accompany them.

3. Visit the Mud Volcanoes in Buzau

Who wouldn’t like to be close to a volcano, smell it, feel it, or study it without putting lives in danger? Well, there is surely great news – everyone can do this at the Mud Volcanoes. Scientifically speaking, they are not real volcanoes; a long time ago, when the Carpathians mountains were still forming, the region was characterized by vigorous tectonic activity – this is how this bizarre landscape was formed.

The Muddy Volcanoes are not the volcanoes you would expect, but they are quite spectacular and naughty, dashing cold mud lava while enriching the area with a prickly scent of sulfur.

The Living Fires of Lopătari, Buzău are among the most mysterious and unusual phenomena you may find in nature, and many travelers miss the opportunity to visit them.

The main route to the Living Fires starts from the Terca village. This natural phenomenon is generated by the gases that blow out the earth’s cracks and then take fire spontaneously, forming flames of 50 up to 100 centimeters in height.

They say that the fires burn down once in a while, but people light them on.

5. Wander around the Virgin Forest of Strambu-Baiut

Romania contains about 65% of the surviving virgin forests in Europe, and they have become a real value for both Romania and the world.

One of the best-preserved natural treasures is in Maramures, in the north part of Romania. Strambu-Baiut lay in Tibles Mountains and was founded in 1835 by bringing together several iron foundries in one settlement region.

The forested area lies in 290,000 hectares. However, in ancient times, this region was covered with deep, barely accessible forests that formed a natural fortress.

Bucharest is, without any doubt – a stunning city. The City of Bucharest is an elegant city with a passionate history for visitors to explore. Sometimes Bucharest, gets a bad reputation, but the city is vibrant, energetic, and lots of fun. Lately, it is called ‘Little Paris of the East’ thanks to its huge palaces and beautiful buildings; Bucharest is considered a home to epic mountains, dense forests, and flowing rivers. But in the city, you’ll find a friendly bunch of party people, a cosmopolitan feel, buzzy nightlife. That is the reason why Romania’s capital Bucharest is popular all year-round as a stag do destination. The beers are very cheap, you can do all sorts of crazy activities, and the adult entertainment side of things is pretty damn wild.

An iconic monument, the Palace of Culture built between 1906–1925. It is known for its expression of Neogothic style. It has no less than 298 rooms hosting four museums, historical artefacts, and art galleries.

The Palace is one of the country’s largest buildings and is built on the spot of an even older palace. Until the 1950’s it served as a Palace of Justice and Administration but now the home to four museums.

At present, the Palace is listed in the National Register of Historic Monuments.

8. Go to a festival in Cluj-Napoca

Cluj-Napoca is a beautiful and busy city with fantastic nightlife. Cluj is definitely a festival destination. The Festivals attract a lot of visitors to Cluj and have changed the city and stimulated its growth.

Cluj is home to three of Romania’s most prominent festivals: ‘Untold,’ ‘Electric Castle,’ and ‘TIFF.’ During the spring season, especially at the peak of summer.

9. Swim the Black Sea at Constanta

Want to visit Romania’s Black Sea beaches? Or maybe hear the waves, feel the breeze and eat some fresh seafood? Then the Romanian seacoast by the Black Sea is the perfect escape!  Visit Constanţa, a historic seaside town with many spa resorts, beach bars, and energetic parties. The Greeks founded Constanţa; it is the largest port on the Black Sea coast.

Constanta is considered the main port in the Black Sea, and the most important one in Romania, and the fourth one in whole of Europe.

Romania is known for the most famous castles, like ‘Dracula’s Castle’ and ‘Raşnov Citadel’ from Brasov.

The central area where Brasov is located is a wide-open flat valley. Thus, places like this were once targets for attack and invasion, and this is why any hilltop that provided views and protection had a fortress. Rasnov Fortress offered a lookout to spot invading foreigners.