74% of Romanians believe that exploration is important, according to a National Geographic study 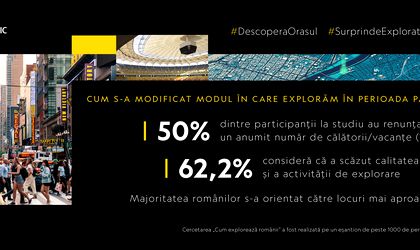 National Geographic announces the premiere of new series of documentaries dedicated to cities. Starting 21st September, new episodes of “How To Build a City” and “Top 10: Art of Architecture” are aired every Tuesday and Friday at 21:00. National Geographic thus invites the viewers to explore the most popular cities in the world, from new and surprising angles.

The documentary series “How to build a city” brings at its forefront the ingenuity of prior and contemporary engineers, scientists, architects and urbanists who created the most remarkable cities across the globe. The featured cities include Berlin, New York, Paris, Tokyo, Naples, Sydney, Seattle, Canberra.

Watch the series “Top 10: the Art of Architecture” to learn about the history of the most fascinating engineering and architectural masterpieces of the world and of their creators, as told by renowned experts. Effervescent markets, stunning stadiums and arenas, museums and galleries-architectural treasures, parks and paradise gardens in cities around the world are brought to the spotlight.

The premieres are followed both on Tuesday and Wednesday evening at 22:00 by the best episodes of the documentary series MegaStadium: Tour of Europe, Lost Cities by Albert Lin and many others.

“How Do Romanians Explore” study

As part of its campaign National Geographic channel commissioned a study to better understand how Romanians explore and how the pandemic influenced this. The research shows that Romanians are keen on exploring the surrounding world, most of them by travelling (79.2%) and approximately half of them prefer exploring undiscovered places across Romania (51.7%), choosing equally urban and nature locations.

It is worth mentioning that the field with the highest affinity among Romanians is discovering stories about cities and human breakthroughs (40.5%), followed by contemporary culture and civilization (39.43%). It hardly comes as a surprise the fact that exploration triggers positive emotions among Romanians such as joy (45%) and inquisitiveness (38%).

Exploration during a pandemic

With the world around us having changed considerably over the past year, the research shows that the pandemic has impacted the exploration activity for 67.6% of Romanians. More than half of the participants in the study were forced to reduce the number of trips/holidays (in average 2) as a result of the pandemic, and 22.7% chose a different location where to spend their holidays.

In general, the focus moved to other places where traveling and exploration were possible, namely on areas in the proximity of home, which became particularly important for keen travelers.

“I encourage everyone to explore the streets of the city and let themselves be carried away, there are so many places and stories waiting to be found, photographed and shared. Wherever you go, you may be surprised to discover unique places that you can’t find in tourist guides. You don’t have to walk too far from home to experience the thrill of exploration, sometimes it’s enough to look at the path you take every day from a different perspective. ” said Vlad Eftenie, urban explorer, photographer and architect.

Another way to continue the exploration is through National Geographic’s yellow portal – a channel which takes the viewer to a variety of places awaiting to be discovered through a fascinating series and documentaries on science, nature, technology, travel and architecture.

More than two thirds of those who travel prefer a more relaxed exploration, to enjoy the places they visit and what they have to offer, without a rigorous planning, while the rest choose to draw a detailed schedule for their journeys.

Media consumption also increased, considering that physical traveling was not possible.  Romanians who prefer exploring through media, enjoy documentary films (44.3%), while youngsters between 18 and 24 years of age are more open to digital exploration.

Once the destination of the trip is selected, most Romanians prefer the comfort of the private vehicle when travelling (71.6%), then by airplane (46.6%) and train (40.5%). These results should not come as a surprise, for health protection and safety reasons, but they should prompt us to reflect – if and how should we consider the wellbeing of our planet when planning for a trip?