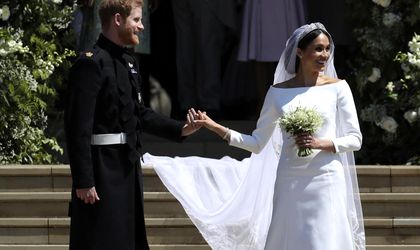 A thousand-year-old English castle echoed with the exhortations of an African-American bishop and a gospel choir on Saturday, as Prince Harry wed Meghan Markle, an American actress, nudging the British royal family into a new era, The New York Times reports.

Ms. Markle, who has long identified herself as a feminist, entered St. George’s Chapel alone rather than being given away by her father or any other man, a departure from tradition that in itself sent a message to the world. She was met halfway by Prince Charles, her future father-in-law and presumably the future king of Britain.

Prince Harry, who is sixth in line for the throne, has long called on Britain’s monarchy to draw closer to the daily life of its people. But the most extraordinary thing he has done is to marry Ms. Markle, an American actress who is three years his senior, biracial, divorced and vocal about her views. Their choices at the wedding, many of them heavily influenced by black culture, made clear they plan to project a more inclusive monarchy.

In a time of tribalism and separation, it was a clear move toward an integrated modern future from the oldest of houses. Seated directly opposite Queen Elizabeth II was Ms. Markle’s mother, Doria Ragland, the descendant of slaves on plantations in the American South.

In the knight’s stalls supporting Ms. Markle, beneath rows of medieval swords and helmets, sat a constellation of American celebrities, among them Oprah Winfrey who, with a great gift for openness and emotional candor, has become an icon for black women.

There were the Hollywood and humanitarian megacelebrities George and Amal Clooney, and the tennis star Serena Williams. A gospel choir sang the Ben E. King song “Stand By Me,” and the couple exited to the rousing civil rights anthem “This Little Light of Mine.

In short, it was not your average royal wedding. Among the throngs who filled the streets of Windsor on Saturday were black women who had flown in from Houston and Atlanta, moved, sometimes to tears, to see a woman of color so publicly adored.

“One of the children of slaves is marrying a royal whose forerunners sanctioned slavery; the lion is lying down with the lamb,” said Denise Crawford, a court stenographer from Brooklyn.

The most startling moments came with the sermon by the Most Rev. Michael Curry, the Chicago-born bishop of the Episcopal Church. Bishop Curry, in the great tradition of black preachers, delivered a loose, improvisational sermon that began as a meandering discourse but built to a passionate, shouting climax, name-checking Martin Luther King Jr. and slave spirituals along the way.

“I’m talking about some power, real power,” he boomed. “Power to change the world. If you don’t believe me, well, there were some old slaves in America’s Antebellum South who explained the dynamic power of love and why it has the power to transform.”

At one point, seemingly sensing the passage of time, he said, “We’re going to sit down; we gotta get y’all married.”

He punctured the hallowed, starchy decorum of the day, visibly shocking some members of the royal family. Some suppressed giggles. Zara Tindall, a granddaughter of the queen, looked as if she might fall off her chair.

“A black reverend preaching to British royalty about the resilience of faith during slavery is 10000000% not what I thought I was waking up for, the royal wedding is good,” Elamin Abdelmahmoud, social media editor at Buzzfeed, wrote on Twitter.

When the couple stepped out of the church and into the sunshine, a jolt went through the crowd, which cheered their first kiss as husband and wife.

For Britons, there was a sense of an old heartbreak being mended. Many people here feel a special affection for Harry, who was only 12 when his mother, Princess Diana, died in a car crash. On the day of the funeral, Harry was made to walk behind her coffin, and much of the country watched as his face crumpled.

“He was such a young boy,” said Christine Janetta, 57, one of the charity workers invited to greet the couple from the lawn on the grounds of Windsor Castle. “We’ve all been very protective of Harry, because we saw that little boy with his broken heart.”

Ms. Janetta said she was devoted to Princess Diana, and that she thought it would have given her a sense of deep relief to see her sons happily settled. “He’s just his mum,” she said. “He is a carbon copy of his mum. Just look at the smile.”

Harry’s popularity helped give him the power to stretch the bounds of convention by marrying Ms. Markle, an American of mixed race. The decision may have a lasting effect on British society, which has been swept by a wave of anti-immigrant feeling. But it has not made things easier for the couple.

As the wedding approached, British newspapers swung the klieg lights of their attention to Ms. Markle’s estranged half siblings, who said scathing things about a bride whom few Britons knew. More damaging were insistent approaches to her father, Thomas Markle, a retired Hollywood lighting director who declared bankruptcy years ago and now lives alone in Mexico.

A week before the ceremony, The Daily Mail reported that Mr. Markle had colluded with a photographer to stage seemingly candid pictures. With that, Mr. Markle dropped out of the wedding in disgrace, leaving Ms. Markle with only one blood relative, her mother, to attend the ceremony at her side.