Stand Up: L’Oréal Paris is committed to stand up against street harassment 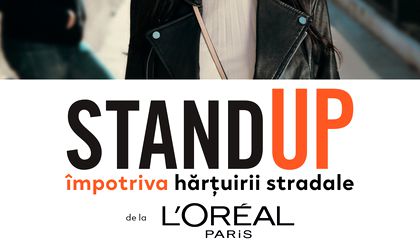 L’Oréal Paris launches in Romania the Stand Up against street harassment program, an initiative with a large social involvement and with a major goal of increasing the awareness and educating with regard to harassment in public spaces.

At an international level, the program was initiated on March 8, 2020, together with Right To Be, an NGO with significant expertise in the fight against various types of harassment, meanwhile benefiting from the support of Eva Longoria, the brand ambassador.

Stand Up is based on a global social study, made in partnership with Ipsos, which investigated the phenomenon of street harassment on a large scale, in different cultures and which revealed alarming figures: 80% of the interviewed women have experienced harassment in public spaces, and of these, 1 in 5 women were minors. Furthermore, the study showed that the main reason people do not intervene when they witness an act of harassment is that they don’t know what is to be done – 86% of respondents stated that they did not know how to react in such situations.

The results of the study confirmed the urgent need to respond and to fight against street harassment by providing adequate tools. Thus, together with Right To Be, L’Oréal Paris is introducing a training program, based on the methodology of the 5D’s (Distract, Delegate, Document, Direct, Delay), which include 5 simple and efficient tools that help people act safe when they are witnesses or victims of street harassment.

Until now, over 1,000,000 people from 41 countries have been trained through the Stand Up program, and 97% of them can identify more easily the harassment in public spaces and they feel more prepared to intervene, after participating to this training. For 2022, L’Oréal Paris set out to have 1.5 million people complete the Stand Up training.

“Street harassment is unfortunately so deeply rooted in our collective mind so that we have come to consider it part of normality, even a form of flattery. When the feeling of safety is taken away from us through gestures, actions, comments and other street harassment manifestations, in fact our right to walk on street without fear is abducted. It is the exact opposite of the feeling that we, at L’Oréal Paris, want to offer to women through out products, namely to feel as they really are, strong and confident. We want that everybody who sees the message of the campaign to go through the training available on Standup-romania.com and recommend it further to their close ones.”, declares Smaranda Teleabă, Business Unit Manager Make-up L’Oréal.

In Romania, Stand Up against street harassment benefits from the support of FILIA Center, an NGO dedicated to the advocacy for women rights and gender equality. An important part of the Stand Up program is represented by organising trainings in high schools and collages from Bucharest and the country, through which over 5.000 young people, with the age over 16 y.o. will learn how to safely fight against street harassment.

“Even if it is a behaviour that can be sanctioned by law, street harassment is still far from being seen at society level, as a form of gender violence, and in the absence of its recognition as a phenomenon, too many girls and women are living with guilt and shame. We believe that it is a huge need for information, so that people who go through street harassment or that are witnesses to be able to take a stand. It is the moment to change the general way of thinking, and the collaboration with L’Oréal and Right To Be represent an extraordinary opportunity to take steps in the right direction.”, affirms Adela Alexandru, Expert in gender equality, FILIA Centre.