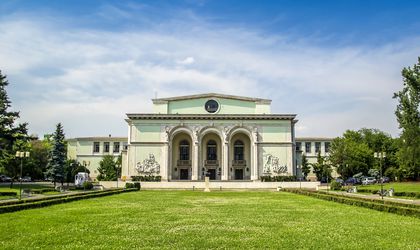 A big sprawl of a city, Bucharest is a mix of historic neighbourhoods, each with its own character and vibe, and a history to match. From the wildly popular Lipscani, a centrally located maze of cobble stone streets lined with bars, to the lesser known Rahova, Bucharest has a wealth of treasures for the curious traveler.

Bordered by Carol Park, one of the city’s landmarks, the Palace of the Parliament , and Cotroceni neighbourhood, Rahova is a colourful mix of old one storey houses with fences and a front yard with a flower garden or trees, tall blocks of flats built during the Communist era. This is where the spirit of the Bucharest of the working classes is still present, so a walk through this neighbourhood will introduce you to the charm of the bygone days. Among the shabby facades, many bearing the signs of partial renovations done in recent year, you will find beautifully restored buildings, such as the red brick edifice The Ark, home of the former Bucharest Stock Exchange. Lipscani, part of the Old Center, Bucharest’s party district, is worth visiting at any time of day. In the afternoon and evening for a quick dinner and drinks, and late night for even more drinks and pub crawls. The many restaurants, pubs and bars are open till late at night and the electric vibe will act as fuel and keep you going all night. While strolling along the historic streets pay attention to the intricate details of the historic facades, and consider visiting the Stavropoleos Monastery, whose frescoes are a jewel of Byzantine art. A landmark of Bucharest, Caru’ cu Bere, a historic restaurant, as well as Hanu lui Manuc, a historic inn with a long and historic past, are great destinations for those who want to sample Romanian traditional food.

One of Bucharest’s most quiet and charming neighbourhoods, Cotroceni is at its most picturesque in spring and autumn, when the linden trees lining the streets steal the show with their fragrance and colours. Admire the beautiful and imposing villas, each with its unique features. The neighbourhood is home to the Cotroceni Museum, displaying old art and books, as well as to the Botanical Garden, the perfect spot for finding refuge in the city on a hot, sunny day. One of the oldest neighbourhoods in Bucharest, it preserves the old charm of the city like no other. Make sure to include in your visit a stop by the Theodor Pallady Museum, a charming art museum hosted by the oldest house in the city. Almost 200 years old, Casa Melik, as it is also known, is an impressive architectural landmark due to its charming features. Built in the second half of the 18th century, it is decorated with unique artefacts and antique furniture.

The neighbourhood of Floreasca, as well as Dorobanti, is one of the best destinations in the city when looking to wine and dine. Here you will find some of the best restaurants in the city, as well as plenty of cafes and gardens. Head to Gradina Floreasca for an afternoon by the pool or an evening of live music, and make sure to check out the Zambaccian Museum for beautiful and authentic art. Stroll along the wide streets lined with old trees and keep your camera ready, as the villas are Instagram worthy. The Jewish neighbourhood is a reminder of the fact that, during the interwar period the thriving Jewish community was Bucharest’s largest minority. The area was subject to many urban policies during the Communist years, which affected Bucharest’s cityscape at a profound level, and many demolitions tore down a lot of buildings and made entire streets unrecognisable. Today, its charm can still be felt and its past read on the facades of the buildings still standing: a synagogue hosting a Holocauts Museu, the Jewish History Museum and the Jewish Theatre.