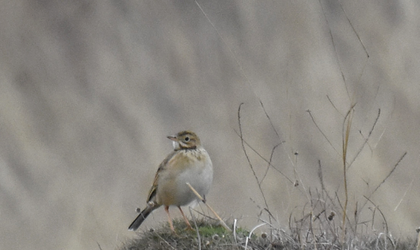 Ornithologists have managed, for the first time in Romania, to take photos of a Siberian bird species – Richard’s pipit (Anthus richardi), according to Agerpres.

The Romanian Ornithological Society (SOR) points out in a release sent to AGERPRES on Monday, that Richard’s pipit (Anthus richardi) was noticed by the SOR preservation director, Ciprian Fantana, in the Techirghiol Lake area.

“I was at Techirghiol on a programme for monitoring the migrating and water bird species. While I was counting the shelducks, I noticed a small-sized bird which caught flight from the lake shore and made a sound that reminded me of the Anthus richardi. Fortunately, I could follow it with the telescope and realise where it sat again. I went near the location and after a relatively short period I have managed to take a few pictures to document the finding,” Ciprian Fantana said. The bird was noticed on 20 December, and Techirghiol Lake has become a meeting point for other biologists as well.

This bird nests in Siberia, in Asia, and spends the winter in India and in South-East Asia.

It very rarely, but regularly comes up in the West of Europe, usually in autumn, between September and November. Richard’s pipit birds are very small, their body reaching maximum 20 centimeters and 25-36 grams.

Their wing spread isn’t too impressive either, as it reaches 33 centimeters. They are related to wagtails, are very cautious and don’t allow people to get close to them, SOR points out.

This isn’t the first time this bird is seen in Romania, but the third one, but it is the first time when biologists have managed to take photos of the bird.

The Romanian Ornithological Society (SOR) is the most important independent organisation for bird preservation of Romania.