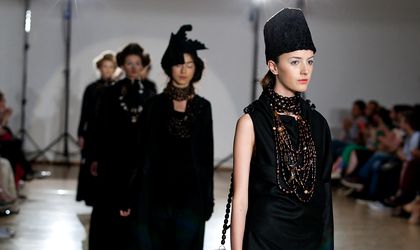 New Age College is the collection that Carmen Secareanu proposes to fashion lovers for this season. The collection reveals a harmony between black and white, a balance between Yin and Yang, or feminine and masculine.

For this collection, Carmen Secareanu took to the Maramures region traditional costumes for inspiration. These are simplified to black and white. The volumes of clothes, as well as the big frills and the large trousers are the details kept by the designer. The accessories of the collection are completed by Roxana Davidescu jewelry, Sepala boots by Carmen Secareanu and Il Passo shoes.

After graduating from the Design section of the Fine Arts University in Bucharest, Carmen Secareanu started her own brand in 2002, in Bucharest, a rather exotic venue for independent fashion. She stood out and defined her own creative vision & style and subsequently won the National Contest for Design Innovation (2004), the Institut Francais Pasarela Award (2008). In the spring of 2009 her current collection was shown at the French Fashion Institute, part of the official program of the Paris Fashion Week.

She became widely appreciated by the local and international fashion press – in 2010 was voted best designer of the year at the Cristal Globe Awards inBucharestand that year she has been elected one of the three top Romanian designers recognized world-wide by ELLE magazine. Her work was shown in individual and group fashion events in Paris, London, New York, Anvers, Trieste, Oxford.

With a flair for avant-garde patterns, architectural structures and minimalism lines and colors, Secareanu mixes sport and classical design features, using natural or high-tech materials, taking her inspiration from the contemporary European pattern as well as from the traditional cut of the Romanian archaic societies. A multi-source futuristic mixture unique onto itself. She has recently began to develop object and urban installation design, with the WindFlowers on show at the London Festival of Architecture in 2010.