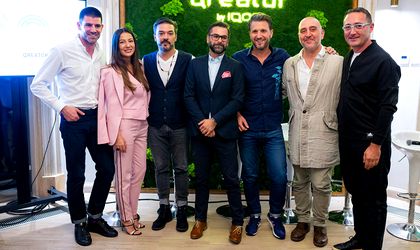 The Qreator space by IQos has become, one year since its launch, a point of meeting and reference for the creative communities in Bucharest. After the experiences accumulated over the year, it is now aiming to become even more involved in the community, by launching a new challenge to the public – the Qreator Institute.

The Institute’s mission is to generate and curate quality content, to be a place of dialogue between curators and their communities. It also reunites the communities interested in: music, film, photography, writing, dance, theater, fashion, business and gastronomy.

The seven curators will develop projects that will involve the communities both offline and online in the year in which they have a mandate and will meet each trimester for discussions about the Institute’s strategy and vision and the curatorial lines. Their creativity and expertise represent the key towards an open dialogue with the creative communities in the previously mentioned fields.

“A year ago we planned to give back the Oromolu Villa to Bucharest and its people. In the last 12 months we’ve succeeded in transforming it into a creativity hub that has hosted over 450 events and whose doorstep was passed by over 30,000 people living in Bucharest. Now we are aiming not only to take the story further, but to take it to a whole new level,” said Alina Frincu, IQOS Risk Reduced Products Philip Morris Trading Director.

“Through the Qreator Institute we want to transform this creativity hub into a hub of values. The Institute represents the intersection between the curators’ values and the brand’s values. And because each of us is the curator of its own life, one of the proposed projects will be a personal project that will deeply reflect the interests and the vision of each member of the Institute’s board,” also said Alexandra Olaru, Corporate Affairs Philip Morris Trading Director .