First beatbox looping platform in Romania / BLIP to be launched 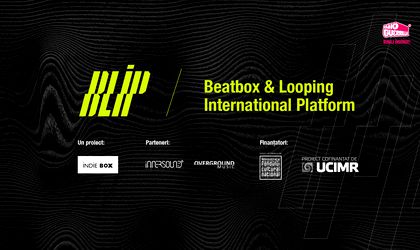 BLIP / Beatbox and Looping International Platform is the first platform in Romania dedicated to the beatbox and looping artists, two musical processes that highlight the creative potential of the human voice.

blip.indiebox.ro was developed during the project ”100% human voice” coordinated by Indie Box and proposes itself to support and promote the beatbox and looping artists, as well as to encourage their collaboration with artists from other musical genres and creative fields. BLIP represents an online space that will host a series of contests for the creators, as well as audio-visual productions, workshops and online tutorials (in beatbox, live looping, vocal technics, etc), interviews, live streaming.

The first competitions on the platforms are taking place in 3 pillars:

The artists that want to take part are invited to enters their works on blip.indiebox.ro. All the information about the entering procedure, as well as the contests’ rules are available on https://blip.indiebox.ro/#learn-more. There will be awarded prizes in a total amount of RON 13.800 Lei, offered with the support of AFCN and UCIMR.

Entering the contest and sending the works can be done during September 23 – October 15 2020, 23:59 CET. There will be no entering fee. The judging process will take place 15-30 October and the winners will be announced on November 1st on blip.indiebox.ro.

“We want to promote the musical productions created exclusively through voice and to contribute at the developing of the beatbox and live looping community in Romania. We believe we have a lot of talented artists that deserve to be encouraged to develop their skills and become famous internationally,” said Alexandra Balasoiu, the project’s coordinator.

On the BLIP platform will be launched for the firsttime the production KABLAT, the new musical identity of the artists Denis Bolborea, present untilnow in projects and different collaborations such as Blue Noise, I am You, Tangaj Dance Collective, Singing Bodies’ Trilogy s.a.

The song Running was produces during the project ”I am you” – a collaborative and interdisciplinary creation medium developed by Indie Box and AC Leonte. Running is a musical project “87% human voice”, in which the musical production is realized mainly through voce and beatbox.

Indie Box activates in the performative arts field, putting accent on the research and creation of innovation in music and the contemporary dance. It is part of the group AREAL – Spațiu pentru dezvoltare coregrafica, and this year proposes a series of workshops and online performances, launches BLIP – Beatbox and Looping International Platform, as well as a new musical EP, created 100% through voice.

BLIP is part of the project”100% human voice” initiated by Indie Box and implemented in partnership with Overground Music, InnerSound and Radio Guerrilla.

The cultural project is co-financed by the Administration of the Cultural National Fond and the Romanian Musical Interpretative Creation Union.