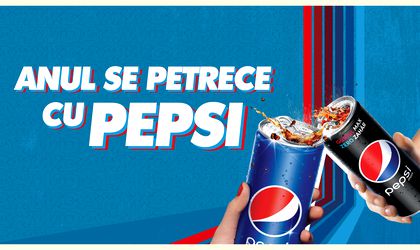 For Romanians, The New Year’s Eve party has always been a special moment. If Christmas is the quiet and more traditional celebration dedicated to the family, New Year’s is its more rebellious, crazy, unpredictable, and free-spirited brother.

But no matter how unconventional the New Year’s Eve might be, of course, it also has a tradition of its own: it is always spent home with the TV on. Not only does one know when it’s 0:00 o’clock and the year starts, but also the TV programs each year are the epiphanies of entertainment and fun.

Pepsi is always in the center of fun

Just as New Year’s Eve is an event-celebration that is never missed from our hearts, Pepsi has been for more than 50 years unmissed from the New Year’s Eve table. It has been a figure in the memories just as one can remember the likes of Dan Spătaru, Corina Chiriac or Angela Similea singing in the background or as a sketch with Dem Rădulescu, Toma Caragiu or Amza Pellea was rolling on the TV.

And because Pepsi has been the brand that Romanians have been enjoying New Year’s Eves for 54 years on, the 55th one brings together all the generations, in safety conditions and ready for a maximum of entertainment, alongside another brand that made history in the Romanian entertainment – Pro TV.

Iuliana Dragomir, Senior Brand Manager, said: „The creative concept received from the agency – Pepsi as a `time machine` that carries Romanians in the past – was built on a truth that has as it core our brand DNA – the strong connection with all the generations. More than that, we realized since the start that the scalability of the creative idea was huge, from digital to in-store, where our consumers will soon have a lot of surprises”.

Pro TV, Pepsi, DDB and OMD created a legendary New Year’s Eve for Romanians in which the Pro stars shared the stage with special guests that will be representative for all the generations in the Romanian entertainment. The spectators want a show “just like the old times”, but at the same time modern, with unique music, dance and humor moments that will find their place in our country’s entertainment history.

From idea to execution, the DDB team was involved in every stage alongside Pro TV’s creators in creating a never before seen show, wishing for PROTEVELION to become a real landmark, not only for Pro TV but also for the brand and the agency.

Ștefan Vasilachi, Creative Director DDB, said: „If I am not mistaking, it’s the first time that a brand spends the New Year’s Eve on TV in Romania. And most of all, the most important TV station, with the biggest stars. Of all brands, Pepsi is the most entitled one to do so because is the only brand that truly units generations, that is equally loved by those over 60, as well as the young generations and that has been present since the 60’s on the New Year’s Eve tables”.