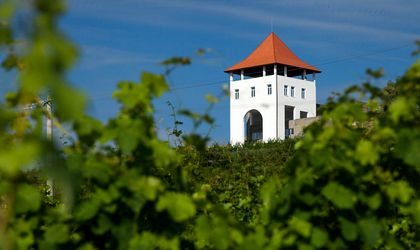 On a gentle hill at 330-350 m above sea level, with generous exposition to the south, right above Tarnava Mica river, Villa Vinea vineyards are just 15 minutes driving from Tirgu Mures airport. The region is well-known as one of the best for white grapes in Romania, but recently the red varieties planted during the past 15 years, produced quality crops and an excellent lot of Pinot Noirs and Feteasca Neagra.

The story of Villa Vinea started in 2004, when Heiner Oberrauch, an Italian investor, discovered in the middle of Transylvania, near the city of Tirgu-Mures, the land. Up until now, the winery has managed to produce 250,000 liters of wine and sell about 150,000 bottles, after an investment that reached EUR 3.3 million.

The vineyard is planted with local and international varieties, with a southeastern alignment. The first grape varieties featured were Sauvignon Blanc, Riesling, Gewürztraminer, Pinot Noir, and Merlot. A German white variety, Kerner, and an Austrian red one, Zweigelt, were also added to the portfolio.

This conjunction of local and international was extended to the collaboration between Italian winemaker Lucin Celestino and Denes Mihaly, the cellar master, who spent his working life in the vineyard and learned with each season, the craft of making memorable wines.

Currently, the location does not have its own accommodation, but boutique hotels & pensions are nearby, as well as several options in Targu Mures.

Read also: Call For Leaders 2021 | Mircea Matei (Villa Vinea): “Keeping people safe and going that extra mile to reassure customers that your products and premises are safe to have been priorities for anyone working in the food & beverage industry.” What’s next for Villa Vinea

The Selection range – Contessa, Cuvee Celest, Rubin, or Diamant – will benefit from a major investment in the next period of time. Currently, the production of wines from the Selection range will be 35% of the total Villa Vinea wines this year, but these wines need a longer aging period, which makes the distance from production to sale be 4-5 years.

To meet the ambitions regarding the development of the Selection range, the winery will benefit from an investment of over EUR 1.2 million for the expansion of the storage area by another 600-700 meters, the creation of indoor tasting areas, and accommodation facilities. After the investment, wine production will increase by 30% in the next two to three years.

The new structure will be destined for the sparkling wine and the premium range of the brand called Selection, which will reach 40% -50% of the production, after the commissioning of the new line.

“Production will not increase much in liters. We now really have a lack of production capacity, because we bought another 40 hectares of vines and the winery was sized for these 32 hectares, plus a few more. We will increase production in the next two to three years by 30%”, explains Mircea Matei, the general manager of Villa Vinea.

Of last year’s total sales, 40% were generated by HoReCa, 30% retail, 5% online, and between 20% and 25% of the three own stores, one in the actual winery and two others in the county.

On your way to discovering Transylvania’s best-kept secrets such as the Villa Vinea, one should know that part of the taste comes from hot and dry summers with an above-average amount of sunshine and little precipitation alternate with cold and rough winters. The long autumn with its cool nights helps the grapes to reach an aromatic ripeness. But there is more.

Success means to team up with the other locals

Near Mica, the village where Villa Vinea is situated is Cund – one of the best known Transylvanian villages, where another investor promoted the area as “Valea Verde”- a series of countryside houses that can be rent for different periods of time, as well as a fine dining restaurant. The 150 inhabitants village has also Manufactura de Branza, the local business created by Istvan Varga. Istvan has his own cattle and the entire process is crafted.

“Besides selling our cheese in Villa Vinea’s own stores and using it for the wine tasting, the winery provides us Feteasca Neagra for manufacturing one of our specialties. The quality of the wine actually improves our cheese because we use bottled wine,” explains Istvan Varga.

New specialties of maturated cheese are added constantly – currently, they have maturated cheese with green pepper, nuts, chili, basil, and vegetal charcoal, among others, and it is available to order online on www.manufacturadebranza.ro.

Moreover, Villa Vinea has a partnership with Slow Food Targu Mures Association, an NGO which promotes both local food and local producers, but also clean and sustainable businesses as well as preserving recipes and cooking methods from the locals and the minorities.

The pandemic approach of the business

“Not having a brand presence in the area of the big events, we had nothing to lose, and what was lost from HoReCa, was recovered from online, retail, etc. In terms of turnover, the difference between 2020 and 2019 is about 2 percent. In 2021 we estimate an increase of approximately 25% in turnover, compared to 2020 when we stood at LEI 3.2 million”, explains Mircea Matei of who aims to sell 130,000 Villa Vinea bottles this year.

Traditionally, before the pandemic, Villa Vinea wines were distributed to HoReCa in a percentage of 50%, a component that in 2020 decreased to 30%, but currently shows signs of recovery. The rest goes to general retail, own stores, specialty retail (wine shops), and online, which reached 5% last year.

“Coincidentally, we opened the online store in early 2020, before the pandemic, and we reached 5% of sales in this area, with peaks recorded during the lockdown period,” says Matei, who aims for online sales to reach 10% in the coming years.

In terms of exports, 15% of production goes to Italy, where the founder of the winery Heiner Oberrauch runs several businesses. Otherwise, Matei describes it as a component that he “does not emphasize much at the moment, developing over time a series of smaller partnerships with websites and specialty stores in countries such as Germany, Poland, Denmark, the Netherlands or Canada, owned mostly by those who visited the winery on their trips through Transylvania”.