The impact of the COVID-19 pandemic on food consumption 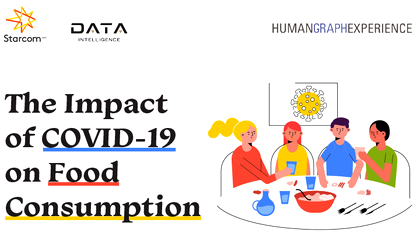 According to the study “The impact of the COVID-19 pandemic on food consumption”, conducted by Starcom Romania, Romanians have been thoughtful about food spending in the last year and have continued to buy familiar brands. At the same time, they became more aware of what they ate and bought healthy foods: almost 90% of them avoided products with artificial additives, 86% used natural or organic ingredients when preparing food, and 82% avoided carbonated drinks. The new study is part of HumaGraphExperience, a series of monthly infographics made by Starcom Romania, based on quantitative studies.

“The pandemic period has emphasized the need of Romanians in the urban environment to have a healthier lifestyle in order to counterbalance a sedentary lifestyle and has increased their appreciation for family meals. Vegetables and fruits have been at high demand in the diet of Romanians during this period, to the detriment of products with artificial additives and preservatives. At the same time, the pandemic context has created the perfect environment for people to cook more at home, paying more attention to products used in food preparation, with natural or even organic ingredients”, explained Andreea Zanfir, Consumer Insights & Research Coordinator, Starcom Romania.

The main behavior features when shopping for food

Naturally, the pandemic has made Romanians buy more packaged food than in other years, for hygiene reasons (93%), but they also continued to buy unpackaged food, mainly for environmental protection reasons (82%). At the same time, Romanians turned to non-perishable foods or with a more generous expiration date (84%), made purchases based on shopping lists (83%) and purchased large quantities at once (74%), in order to stock up and avoid crowded spaces.

To a large extent, respondents stated that they focused on food at special offers (90%), paying more attention to the price compared to other years. However, familiar brands have remained among consumers’ choices, together with tasty products, consumed to satisfy the need for pampering.

Where Romanians purchase their food

Physical stores (supermarkets / hypermarkets) remain the main channels where Romanians from urban areas do their weekly shopping. Occasionally, at most 2-3 times a month, they also resort to online food shopping.

The main criteria for food selection

In addition to price (69%), Romanians took into account other criteria when choosing to buy their food: product quality (68%), freshness (56%), previous experience (39%) and the list of ingredients (37%).

Young people, aged between 18 and 34, were more attracted to packaging and promotion / advertising, compared to other age segments, while for adults over 55, freshness, personal experience, natural ingredients and favorite brands were more important.

During the pandemic, health became a major concern for Romanians. Thus, they began to be more aware of what they consume: almost 90% of them avoided foods with artificial additives and preservatives, 86% used natural or organic ingredients in food preparation, and 82% avoided carbonated drinks.

Cooking, hobby and reason for socializing at the same time

Cooking has become one of the hobbies developed by people from urban areas during the pandemic. In addition, the new context led to changes in cooking habits: people tried new recipes (88%) and new types of food (86%) and prepared homemade desserts to create moments of family pampering (82%).

Although 84% of respondents stated that food is an important component in their social life, people from urban areas were cautious during the pandemic: they ate meals as a family (87%), in front of the TV (67%), or in front of computer (57%).

On the other hand, Romanians consumed less frozen and semi-prepared products, as well as fewer alcoholic beverages.

People aged 25-34 have changed their eating behavior the most.

For 7 out of 10 Romanians from urban areas, fresh fruits and vegetables became indispensable during the pandemic period. Similarly, coffee (62%), dairy products (58%) and poultry (55%) are now staple elements in Romanians’ diet.

Nonetheless, meat continues to be one of the main products used in cooking (64%), along with fruits and vegetables (58%), followed by spices (52%) and oils (52%). Other products used are rice, dairy products and fish.

Younger people were more attracted to using flour and flour products, as well as frozen fruits, vegetables and sugar, compared to other age segments.

The study was conducted by Starcom media agency, through online interviews, on a sample of 806 persons, female and male, over 18 years of age, internet users, from urban areas, between April 28 and May 10, 2021.