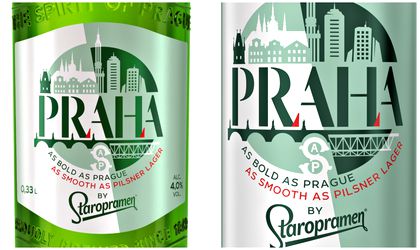 Bergenbier S.A., part of the Molson Coors group, expands its portfolio with the new Praha beer, created by the famous Staropramen brewers. Staropramen’s vast experience and rich heritage in brewing differentiate Praha, the new Pilsner Lager, with an unique combination of rich taste, bold aroma and lightness. Inspired by the effervescence of Prague, the new premium beer range will be available in Romania starting in February.

“We mark an important moment with the first launch in 2022: the expansion and consolidation of the premium portfolio of Bergenbier S.A. The balanced mix between rich taste and the feeling of lightness, as well as the values ​​of the new brand, bring us the conviction that Prague responds to the tendency of romanian consumers to move towards premium beers, with personality, which they consume responsibly. In addition, the success that Prague has in the other European countries in the Molson Coors group, demonstrates the quality of this premium beer “, points out Mihai Voicu, General Manager of Bergenbier S.A.

The recipe for Praha beer was inspired by that of master brewer Michael Trnka, who spent 28 years at Staropramen in the late 19th century. Although strong beer styles were popular at the time, Trnka was a visionary and chose to venture outside the traditional territory, traditional brewing techniques, in search of a beer full of aroma, but smooth in taste. The beer he created was a tribute to the legacy of Czech beer, which he also brought to a modern era. He managed what others considered impossible until then: a beer rich in taste, but with a feeling of lightness.

Based on this recipe from the past, today’s Staropramen masters created Praha, a modern beer with a rich taste, bold aroma and lightness, which speaks of the city of Prague and its various influences, while proposing a different and bold version on the premium market in Romania.

“We are happy and proud of the expansion of the premium beer portfolio with the new Praha brand, created by master brewers Staropramen: a beer with a rich taste, but also a feeling of lightness, which inspires and satisfies the needs of new generations of adult consumers. They are looking for bold ideas, different brand profiles, creative and interesting, which reflect their daily values ​​and at the same time give them the full flavor of a high quality premium beer. Prague is with these adult consumers, combining the effervescence of Prague with the lightness of a pilsner lager “, explains Teodora Agafiței, Marketing Director of Bergenbier S.A.

Praha will be available in Romania in off-trade and on-trade stores starting in February, in 0.5l aluminum cans and 0.33l bottles.